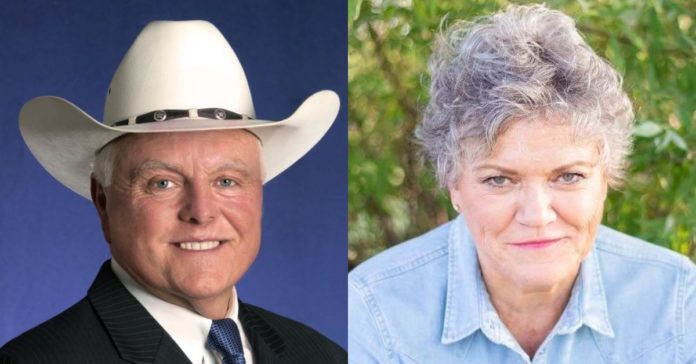 Democratic challenger Kimberly Olson has raised five times as much Texas Agriculture Commissioner Sid Miller, according to the latest campaign filings with the Texas Ethics Commission.
Olson raised $130,557.06 and spent $82,963.53, according to her filing. Miller by contrast raised $24,570 and spent $115,008.45. Olson has $161,854.84 in cash on hand while Miller has $52,606.36.
Olson’s biggest contribution is $8,000 from the Texas Democratic Women PAC, followed by $2,000 from the Tarrant County Democratic Women’s Club and $1,770 from the Parker County Democratic Party General Funds. She’s also received donations ranging $25 to $1,000 from individuals. Stripe, a company based out of San Francisco, donated $3,704.60 to Olson’s campaign.
Miller’s biggest contributions were $5,000 from Harold Estes, $5,000 from Brazil Moore and $5,000 from Kathaleen Wall. The biggest special interest groups to donate to Miller is $2,000 from the Dr. Pepper Snapple Group PAC, followed by $1,000 from the Texas Poultry PAC.
Olson spent more than $40,000 in advertising on Facebook, Google, billboards and mailing, her biggest expense. Her next biggest expense was more than $38,000 for salaries and wages.
Miller spent $4,950 in advertising and $8,100 in salaries and wages. He also spent approximately $2,000 for fundraising expenses.
Reform Austin will continue to track political contributions throughout the election season, and follow up on how special interest money influences bills and votes.