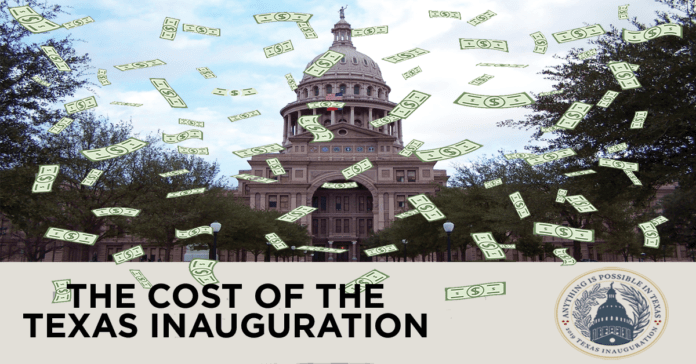 Last Friday, the 2019 Inaugural Committee released the list of inaugural contributors, more than a month after the inauguration for Governor Abbott and Lt. Governor Dan Patrick. Over 200 contributors raised $4.95 million. They consisted of individuals, PACs, and corporations.
As Reform Austin previously reported, there are no limits to inaugural contributions by individuals or corporations because, under Texas law, they are not classified as political contributions.
Inaugural contributors included underwriters who gave at different levels to get greater event privileges during the two-day affair. The Texas Tribune reported “Gold Star” contributors who gave $25,000, the third highest level, got VIP treatment and exclusive access to the Governor and Lt. Governor at a candlelit dinner at the Fairmont Hotel in Austin.
Corporations made up over 63 percent of the inaugural contributions amounting to $3.1 million. Leading the corporate donors are Williams Brothers Construction Company with a whopping $250,000, S&B with $100,500, and $100,000 contributed apiece from AT&T, HEB, IBC, and Petroplex Energy, Inc. The Walton family-owned Walmart was again one of the top corporate inaugural donors giving $75,000. Walmart heiress Alice Walton previously served on the 2015 inaugural committee.
Industry and trade associations also gave to the inauguration. The greatest contribution came from the Associated General Contractors of Texas with $100,000.
Individual donors collectively gave $1.8 million. Topping those donors is inaugural committee co-chair Melinda Hildebrand, Vice President of the Hildebrand Foundation and wife of oil and gas company chairman Jeffery Hildebrand, with $250,000. Next, at $100,000 apiece were Schlotzky’s founder Bobby Cox, inaugural committee co-chair and CEO of Hunt Oil Ray Hunt, telecom company Excel Communications’ founder Kenny Troutt, and pipeline company Energy Transfer Partners’ co-founder Kelcy Warren.
Inaugural committee chairman J. Bruce Bugg Jr. contributed $10,000.
Our analysis shows more than 50 big money campaign donors for Abbott and Patrick made up 31 percent of all inaugural contributions, for a total of $1.5 million. In the last election cycle, these wealthy donors gave $8.1 million to Patrick and Abbott’s re-election campaigns.
As previously reported, the inaugural committee chairman and co-chairs collectively gave $1.5 million to Abbott and Patrick in the last election cycle.
Big individual donors like Bobby Cox gave $50,000 in cash contributions and an in-kind of $59,650 for aircraft use to Abbott in the most recent election cycle. Over the same period, Kenny Troutt gave $550,000 to Abbott and $100,000 to Patrick, and Kelcy Warren gave $500,000 to Abbott and $200,000 to Patrick.
Our analysis also shows special interests made the lion share of contributions, namely construction & real estate, oil & gas, beer distributors, and lobbyists.
The cost for the 2019 inauguration is nearly $5 million. For context, Governor Abbott and Lt. Governor Patrick’s 2015 inauguration cost $4 million dollars, more than double the cost of Governor Perry’s inaugurations in 2007 and 2011, according to the Houston Chronicle.
It is still unclear who else was on the Inaugural Committee as no further information has been released from the Committee, the Governor’s office, or the Lt. Governor’s office.