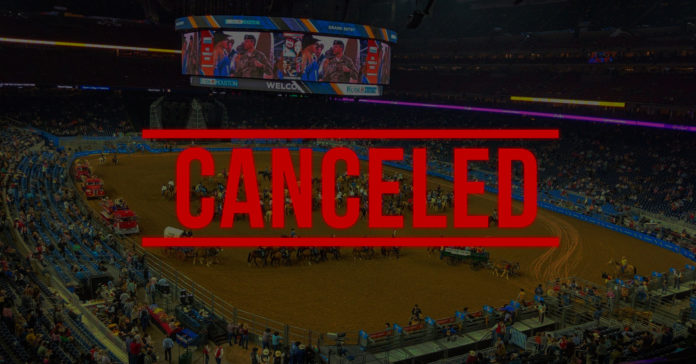 For the first time in eighty years, the Houston Livestock Show and Rodeo has been canceled as concerns over the spread of coronavirus escalate.

On Wednesday morning, Houston Mayor Sylvester Turner informed city council members that a press conference would be held at noon to make the announcement.

The official announcement of the Houston Livestock Show and Rodeo closure was made today at 12:36 p.m.

“By the end of today I will be signing an Emergency Health Declaration for the city of Houston… which will remain in place for 7 days as we continue to assess the situation,” Mayor Turner said at the coronavirus press conference today.

“Montgomery County’s case was not tied to international travel” and Mayor Turner said, “that changed things.”

Hidalgo stated, “We are not an island nation, it’s possible that despite our containment effort that we will see a wider spread of this virus.”

Persons attending the rodeo on Wednesday were told rides were shut down without warning.

The rodeo is the latest of a growing number of large event cancellations across the United States, including Austin, Texas’ South by Southwest (SXSW).

Ahead of Wednesday’s announcement, over 11,000 concerned Houstonians signed a petition urging Governor Greg Abbott to cancel the rodeo.

“As COVID-19 spreads across our nation, many of us are concerned that large gatherings put us all at risk of further community spread. Other organizations are cancelling expos, concerts, conferences, and other events all across our nation, and we believe that the Houston Rodeo should do the same.  We hope that they will reconsider continuing, and put health, safety, and lives first,” the change.org petition states.

Historically, The Houston Livestock Show and Rodeo has had a tremendous effect on the livestock and entertainment industries. The Rodeo has presented nearly 19,000 scholarships since the first scholarship was awarded in 1957.

Houston’s 2019 Livestock Show and Rodeo attracted more than 1 million people, with 27 percent attending from points beyond Greater Houston. In 2019, the RodeoHouston worked up a total economic impact of $227 million and generated a total economic activity of $391 million in Greater Houston. Additionally, Houston’s rodeo generated 3,694 jobs, while supporting a total of 5,133 in the Houston area.

Academic scholarships that students across Texas count on are also at stake, and for many, the scholarships make a career path possible.

The Houston Livestock Show and Rodeo is known around the country for its scholarship program that consists of more than 800 scholarships and more than $14 million awarded in one year. Currently, more than 2,300 students are on Rodeo scholarships, attending more than 80 different Texas colleges and universities. More than  $230,000,000 dollars has been awarded in scholarships since 1957.

Many of these students are planning to study animal science, biochemistry, nursing,  business, economics, biology, and petroleum engineering.

Your rodeo/concert ticket allows access to NRG Stadium AND NRG Park, including NRG Arena, NRG Center and the Carnival. It is yet to confirm what will happen when it comes to refunds from the cancelation of RodeoHouston. On the RodeoHouse website under carnival rides and food it states: All sales are FINAL. No refunds, no rain check, no cash value. Carnival hours are subject to weather conditions. All purchased items are only valid during the 2020 events.