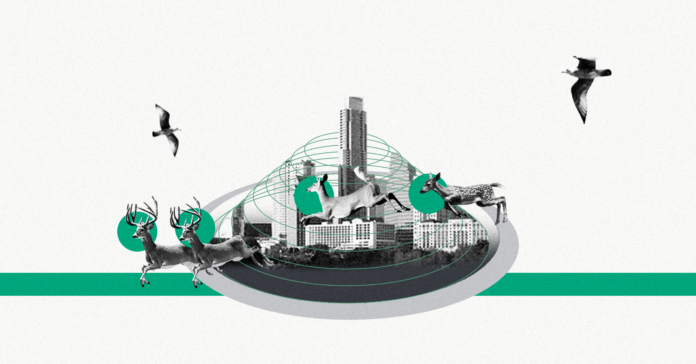 Texans who are continuing to stay home during the pandemic might be enjoying more time outside — taking walks to escape the house, or picking up a new hobby like birdwatching in their own back yard. With darkened storefronts all over cities across Texas, you may have even seen more fireflies coming out in the absence of bright business lights.

But just as the pandemic has had some devastating economic impacts on the state, the shutdown hasn’t been all good for wildlife and insect populations either.

In fact, experts say the majority of the effects of the shutdown have been negative for native wildlife — not just in Texas, but around the world.

There’s a host of reasons why this is, but a common misconception is that people think the shutdown has actually been good for wildlife.

Since researchers are also confined, too, less research and data has been possible, so the theories are mostly anecdotal. Someone may say they are seeing more wildlife, but it may not be that the population is increasing or even thriving, said Dr. Maureen Frank, an assistant professor for the Department of Rangeland, Wildlife and Fisheries Management at Texas A&M University and an AgriLife Extension specialist for wildlife.

“This has been a pretty big topic of discussion in the wildlife industry,” Frank said. “It’s a much bigger issue than people realize. When the shutdown began, a lot of the initial impact was from some false stories, unfortunately. Some things you can see clearly without data or research that there’s been an impact, whether it’s positive or negative. Take for instance sea turtles on the beaches in Brazil. Those beaches used to have a lot more people, but with them being more empty, there’s been an increase in sea turtles coming out on the beach because there are fewer people around. But often we imagine that if we all just stop what we’re doing and stay home, everything will get better for wildlife, and that’s not really true. There are a lot of wildlife populations that rely on humans to survive.”

Aside from the sea turtles taking advantage of empty beaches to hatch their young, there have also been reports of whales swimming into shipping channels in the Mediterranean, wild boars roaming the streets of Barcelona, and mountain goats exploring a town in Wales. While they haven’t been “running amok” as some reports have noted, in some areas of the world, a lack of humans has made them perhaps more curious and allowed them more space to wander.

Spending time in your yard this spring may also have increased your sightings of fireflies, a population that is most active in the cooler, rainy spring days. Wizzie Brown, AgriLife Extension Program Specialist for Integrated Pest Management in Travis County, said the shutdown hasn’t necessarily increased firefly populations, but stay at-home-orders may mean you see more of them.

“With fireflies, habitat is an important factor,” Brown said. “Light pollution can definitely affect their habitats in trees and shrubbery, so if you leave lights on at night a lot, that could mess with their signaling and how they find mates. If businesses are closed or closing earlier and turning off their lights, you may start seeing more. But the weather is a bigger factor. They like areas of moisture or wetlands, so if Texas has decent rains, we’ll typically have better populations of fireflies.”

Brown said the Saharan Dust arriving in the state this weekend shouldn’t affect the fireflies either. Not only are insects incredibly resilient, she says, but they also breathe differently than other animals or humans. So, if you see more fireflies, just enjoy them, Brown said.

“We honestly think people are just going outside more, and that’s an effect that the shutdown has had,” Brown said. “I think that’s a great thing! People are interacting with nature more and learning more about them and as a result, you’re just seeing them more because you’re looking for them.”

While these nature sightings may seem charming and hopeful, the pandemic shutdown has had mixed effects on dangerous activities like poaching and illegal trade of wildlife products.

Illegal wildlife trade of products like ivory or pangolin scales have decreased due to tighter border security and restrictions on transportation, especially from country to country. But experts say that the decrease in those illegal activities could quickly disappear unless conservationists take the pandemic as a valuable opportunity to “exploit the vulnerabilities” of illegal trade and bring greater awareness and resulting stigmatization to it.

But as restrictions on travel have continued and tourism dollars plummeted, big game populations are facing an increase in poaching.

“Tourism provides a great source of income for a country, but it also provides protection to wildlife,” Frank said. “Tourism money funds conservation efforts and provides jobs for big game guides and guards who also keep a watch out for poachers. Without them there, vulnerable populations like yellow monkeys and rhinos are suffering greatly at the hands of poachers.”

Frank pointed out that some of the more “human” effects of the pandemic — such as testing for a vaccine or social distancing — have also affected wildlife during the shutdown.

“In order to test if vaccines are safe, researchers rely on an ingredient that comes from horseshoe crab blood,” Frank said. “Scientists are working on getting a synthetic alternative, but they haven’t gotten one yet. Developing such a widespread vaccine for coronavirus puts pressure on the horseshoe crab species that already isn’t doing well. There’s also knowledge that wild black-footed ferrets are likely susceptible to getting the virus. Researchers caring for them have to be careful about how they interact with them to prevent the spread of disease in them. The ferrets are ‘social distancing,’ too.”

In Texas, there is an abundance of public land for camping, hiking and fishing. Frank said it’s important to remember that although funding for state parks is largely a legislative responsibility, actually going to the parks is also extremely helpful in not just keeping them open, but protecting wildlife species and native plants.

“In the same way that tourism dollars are vital in countries where big game reserves are common, Texas state parks depend on revenue from permits and visitors to keep rangers employed and conservation efforts and research continuing,” Frank said. “There are things that Texans can do all the time to help these wildlife species stay around for good. If you’re going out to a park, always follow guidelines for staying on the trails or practice ‘leave no trace’ methods for packing out trash, burying waste and putting out campfires.”

Although the effects of the shutdown have had some negative global impacts on wildlife, Frank hopes that the pandemic will begin to usher in a new awareness and care for the earth and wildlife populations.

“Regardless of shutdown protocols, there are always ways to be wildlife-friendly. One of the things we’ve realized during the shutdown is that people have become way more observant,” Frank said. “It’s not that wildlife has necessarily increased movements or population, they were always there — but you might just be seeing them because you’re at home and looking for them. This awareness is hopefully something that people won’t soon forget from the pandemic shutdown.”