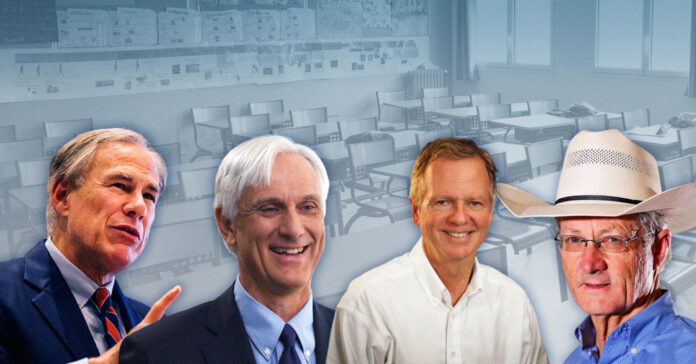 This election cycle has been a muddled fight for the soul of the Texas Republican Party, with establishment leadership like Governor Greg Abbott moving sharply right to stave off primary challengers while big-money groups fund more extreme candidates. One of the main arenas for this fight is over the subject of school vouchers, and a lot of money is being spent to try and elect champions for the practice.

The battles are playing out in two primary run-off elections: State Rep. Glenn Rogers v. Mike Olcott in District 60 (Brownwood) and Elisa Chan v. Mark Dorazio in District 122 (San Antonio), which is an open seat with State Rep. Lyle Larson declining to run for re-election after the redistricting. Major ad buys against Rogers and Chan have gone live, paid for by the Defend Texas Liberty PAC.

On the surface, neither of these ad buys specifically mention school vouchers (possibly because the issue is not generally popular with rural Texans), but scratching the surface shows that the targets are likely chosen for their opposition to school choice. Glenn Rogers in particular has repeatedly made his opposition to vouchers clear, drawing on the experiences of his mother, a history teacher at Graham High School.

“I was raised by a public-school teacher,” he said in a recent ad. “Public schools are not perfect, but they belong to us. They’re our responsibility… a school voucher system does not help schools in our district. Instead, it takes money away from our schools, which are already facing dangerously low funding from the state, resulting in higher local property taxes. School vouchers would be devastating.”

In the other race, Dorazio, has long been a proponent of school voucher systems. He supported two bills in the previous legislative session that would have enabled vouchers, though neither were successful.

“This legislation, if passed, will provide families opportunities to educate their children in the way they need to succeed in life,” he said in a call-to-action last year.

School choice is mostly in the news recently because of hot button social issues such as teaching the effects of white supremacy on American history and the inclusion of gender and sexual identity into curriculums. This has led to school boards being flooded by angry parents demanding that “critical race theory” and “pornography” be banned from schools.

However, the social aspect is an Astro-turfed attempt to rally conservative voters to the cause of destroying public education in favor of private schools. Such schools would be less beholden to guidelines that prevent discrimination, and if taxpayers can be provider with vouchers to send students to them it would effectively re-segregate schools by draining resources from the public sphere.

Texas Republicans are quite clear about this goal. In a recent fundraising letter sent out by the Texas Public Policy Foundation, CEO Kevin D. Roberts spends nearly three pages on unhinged “neo-Marxist” conspiracy theories before making the pitch that all these “woke” agenda items can be solved by supporting a voucher system. The vice president of TPPF is oil and gas billionaire Tim Dunn, who is one of the main backers for the Defend Texas Liberty PAC targeting Rogers and Chan. It’s clear that the matter of school choice is determining where big money donations go, even if the ads themselves don’t make that obvious.