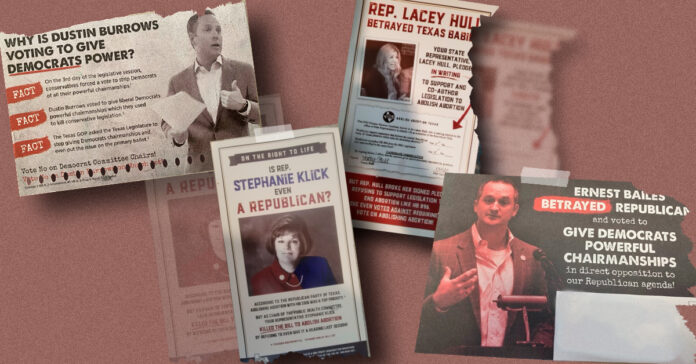 Some of the biggest names in Texas conservative circles are attacking incumbent Republican legislators in an effort to drive the Republican Party even further to the right.

The Defend Texas Liberty PAC has sent direct mail to Texas primary voters, targeting Republicans who resisted the policies of the fringe right.  On their hit list are State Rep. Earnest Bailes (R-Shepherd) and State Rep. Dustin Burrows (R-Lubbock), whose crime against conservatism was not voting to strip Texas Democrats of their committee assignments.

Defend Texas Liberty PAC is the new identity of Empower Texans. They’re best known for generating outrage – launching a massive voter purge in 2018 which targeted the homeless, as well as their leaders making grossly bigoted jokes about Governor Greg Abbott’s use of a wheelchair. This latest incarnation is again funded by oil and gas billionaires Tim Dunn and Farris Wilks and is run by former State Rep. Jonathan Stickland (R-Bedford), who is infamous for his outrageous positions on marital rape and being labeled a cockroach by Texas Monthly.

The PAC is trying to position itself as a major player in the 2022 midterms.  It has already given $1 million to real estate developer Don Huffines, who is challenging Governor Greg Abbott in the Republican Primary.  Huffines is battling former Texas Republican Party Chair Allen West to claim the mantle of the extreme right-wing of Texas and has recently ended up in hot water for defending an openly white nationalist staffer. Huffines is one of the Republican politicians loudly beating the drum to bring cryptocurrency into the Texas government, even as its value has plummeted since a November high.   And let’s not forget about the time he took an unexpected trip to Russia while he was serving as a state senator.

Attorney General Ken Paxton has also benefited from the PAC’s largess, receiving $1 million as he faces multiple challengers who worry the ongoing federal investigation into his office may result in him being indicted (for a second time) before the November election.

Dallas hair salon owner Shelley Luther, who gained notoriety after being jailed for violating anti-COVID measures, has received more than $1 million for Dunn in her two races. Her main focus has been restricting the rights of transgender Texas students and possibly banning Chinese students from universities.

Dunn and Wilks are not the only big-money interests backing the lurch toward fascism. Dunn is also the vice president of the Texas Public Policy Foundation (TPPF), an innocuous-sounding think tank which mostly exists to push extreme right-wing beliefs. In addition to Dunn, TPPF receives funding from Energy Future Holdings, a leading profiteer from the 2021 electric power crisis, conservative titans Koch Industries, and oil giants like Exxon and Chevron. In return for their generosity, TPPF pushes against government regulation of their industries.

Another fringe group targeting incumbent House Republicans ahead of the primaries is Abolish Abortion Texas, whose 501(c)(4) status means they do not have to disclose their donors. The group rose to prominence in 2017 for getting the state party to put abolishing abortion on their party platform and for being behind a bill introduced in 2017 and 2019 by Rep. Tony Tinderholt (R-Arlington), which proposed sentencing women having an abortion to capital punishment for murder.

Among those being targeted for not being conservative enough were State Rep. Lacey Hull (R-Houston), who despite being a vocal supporter of the Texas abortion ban chose not to support a bill that would have criminalized people who get an abortion and punished them with the death penalty; and State Rep. Stephanie Klick (R-North Richland Hills), who has received accolades from the pro-life movement but who opposed the death penalty for women who have abortions.

Far-right money is speaking – loudly.  Any move towards moderation by Texas Republicans will be met with robust and well-funded demands for extremist purity.  Incumbent conservative politicians with proven policy credentials are under attack for having the gumption for standing up to extremist interests and their favorite far-right policies.