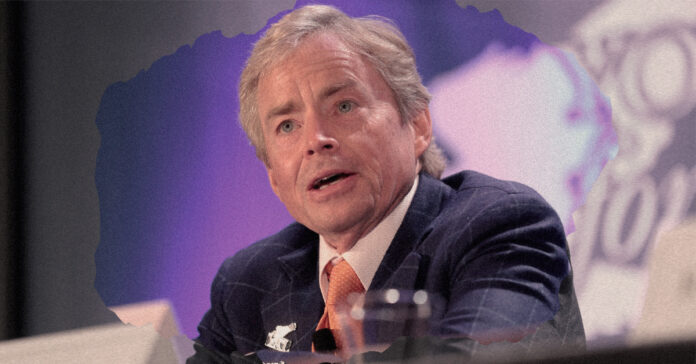 The Republican primary for Texas governor was always going to be a duel of extremes, but a worrying new wrinkle was added this week when former state senator and real estate developer Don Huffines said that he would not take any action against a staffer who has explicit ties to white nationalism.

“If I were to go through the social media history of any young Texan I would find something I disagree with,” Huffines said in an emailed statement. “My campaign will not participate in cancel culture.”

The staffer in question is Jake Lloyd Colglazier, who has done fieldwork for the campaign. He has a long and disturbing history of supporting white nationalism. On his own YouTube channel, he has referred to the “demographic cliff,” a common coded phrase among racists who worry that people of color are replacing whites as the majority. Colglazier has also mocked Asians on his channel and said that he “spit on George Floyd.”

Previously, Colglazier worked at Info Wars where he interviewed prominent white nationalist Vincent James Foxx, formerly of the California white supremacy group Rise Above and a participant in the attempted insurrection at the U.S. Capitol on January 6. He also interviewed Faith Goldy, who appeared on neo-Nazi podcasts affiliated with the Daily Stormer.

Colglazier is tied to the America First/Groyper movement, a prominent alt-right sect that advocates for a white Christian America. The connections were discovered by the Political Research Advocates, who noted that Colglazier had founded a far-right chatroom that openly advocated for “death to all minorities.” He has been openly working for the white nationalist infiltration of the government since at least 2017.

Huffines’ decision to not cut ties with Colglazier is a disturbing portent of the way we can expect the midterms to go. Though the gubernatorial candidate seems to be standing by his staffer for the time being, other conservative groups like the True Texas Project have begun deleting any indication of being associated with the white nationalist. Whether they have actually cut ties with him for his views is unclear.

Huffines is running to the right of Governor Greg Abbott and has accused the governor of being too liberal. His main complaints are that Abbott instituted some restrictions to protect Texans for COVID and that the governor was too soft on immigrants crossing the southern border. Abbott spent most of the legislative session trying to head off extreme right-wing criticism by passing a swath of draconian voter suppression and social injustice laws, as well as launching Operation Lone Star at the border. The latter has led to the entrapment of immigrants and a wave of National Guard members deserting or committing suicide.

With the revelation that one of Abbott’s opponents is happy to incorporate an open white nationalist into his staff, it leaves Abbott with only two choices to hold his position. The governor can either denounce Huffines and Colglazier and risk the wrath of the far-right base, or he can try to one-up his opponent in appealing to Texas racists. Either way, white nationalism is now overtly part of the governor race.