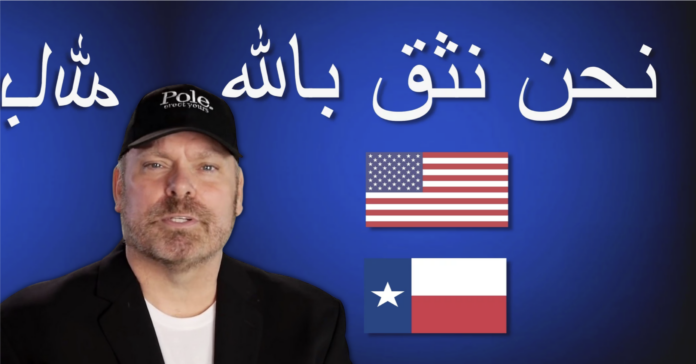 The Texas Legislature passed a law last year that requires public schools to display posters that say “In God We Trust” in a “conspicuous place” but only if the poster is “donated” or “purchased by private donations.” The new law, Senate Bill 797, is the latest attempt by Republican legislators to insert religious beliefs into the public square and prolong the culture wars playing out in public schools.

But Florida activist Chaz Stevens found the law irksome and decided to do something about it. “That should be irritating for you, regardless of what God or not-God you believe in,” he said.

As of Thursday evening, Mr. Stevens, a self-described “staunch atheist,” had raised more than $14,000 to distribute “In God We Trust” signs to Texas public schools written in Arabic. Mr. Stevens reasoned that there was no explicit  requirement that the motto be written in English. “My focus,” he said, “was how do I game the state of Texas with the rules?”

The Arabic text is meant to be redolent of Islam and provoke some Christians’ unease with that faith, Stevens suggested.

He’s hoping schools hang up the poster to make a point about applying the statute evenly to people of any religion or no religion. If a school rejects his poster he plans to file a lawsuit and use the court case to challenge the statute itself.

Don’t mess with Texas? Chaz Stevens didn’t get the memo.