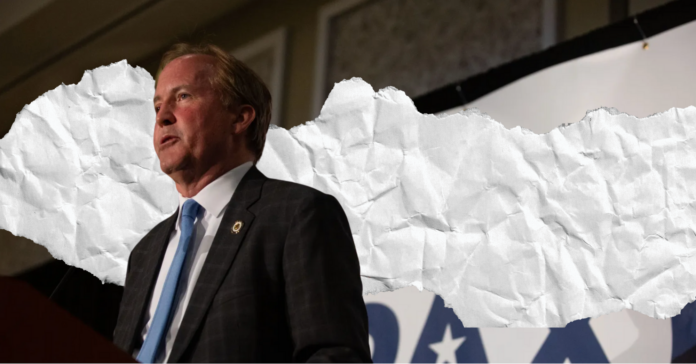 Federal and state law require that ballots be kept secure for 22 months after an election to allow for recounts and challenges — a timeframe Texas counties have had set in place for decades. Paxton’s opinion, which doesn’t stem from any change to state law,  theoretically permits anyone —  an aggrieved voter, activist, or out-of-state entity — to request access to ballots as soon as the day after they are counted. Such requests have been used by activists all over the country as a way to “audit” election results.

The opinion from Paxton doesn’t carry the force of law, but experts say it will almost certainly serve as the basis for a lawsuit by right-wing activists. The opinion has already impacted election administrators across the state, who told Votebeat that they’ve seen an onslaught of requests since Paxton released it.

“[Paxton’s office wants] to throw a monkey wrench into the operations of vote counting, especially if they think they might lose, and Paxton is in a close race as far as I can tell,” said Linda Eads, a professor at Southern Methodist University’s Dedman School of Law and a former deputy attorney general for litigation for the state of Texas. She said she was “shocked” by the opinion.

Paxton, a Republican, was indicted on securities fraud charges in 2015 (he has yet to go to trial), and in 2020, the FBI began investigating claims he used his position to help a political donor. He has denied wrongdoing in both cases. He’s also been among former President Donald Trump’s most vocal supporters, and is now facing a professional misconduct lawsuit by the Texas state bar for filing a lawsuit challenging the results of the 2020 election in four states. The case was dismissed by the Supreme Court. He is up for re-election in November.

“The voted ballots are the core of the election process and the prohibition on disturbing the ballots (except in limited circumstances as permitted by the Election Code) preserves the integrity of the election itself,” wrote Adam Bitter, general counsel for the office, in a letter obtained by Votebeat through a public records request. “Handling of the voted ballots themselves opens up the possibility of accidental or intentional damage or misplacement that could call into question the election after the fact.”

Paxton’s office did not respond to specific questions about why he disagreed with Bitter’s conclusion, nor did he respond to requests for comment.

For months, election administrators in Texas and across the country have been fielding records requests from activists intent on re-examining every ballot cast in every election since November 2020 — or, in some cases, even earlier. In Tarrant County, volunteers with a conservative group occupied a room in the elections office for weeks this summer, examining 300,000 ballots from the March 2020 primary, which were made available by the county 22 months after the election.

Ballots are kept in secure lock boxes for 60 days, and then transferred to another secure facility for the remainder of the waiting period in order to comply with the Civil Rights Act of 1960, a federal law which, in part, requires ballots be securely stored for 22 months. In 2017, the Republican-dominated Texas Legislature even amended state law to specify “22 months,” updating state standards to mirror federal requirements.

In the letter to the attorney general’s office, Bitter, the general counsel for the secretary of state’s office, wrote that an election clerk may effectively have to break state law in order to comply with a request for ballots so soon after an election.

Texas law says that if the ballots’ legal custodian, typically a local election official, “makes unauthorized entry into the secure container containing the voting ballots during the preservation period, or fails to prevent another person from making an unauthorized entry, the custodian has committed a Class A misdemeanor,” Bitter wrote.

Matthew Masterson, who previously served as the Trump administration’s top election security official and now is Microsoft’s director of information integrity, said that Paxton’s opinion will make it impossible for election administrators to appropriately ensure that ballots are kept secure. The security controls exist for a good reason, he said, and undermining them has serious implications.

“If you open up the floodgates and give anyone access to the ballots throughout that process, you have broken that chain of custody to the point where you would not be able to prove that this was the ballot a given voter cast,” Masterson said.

The opinion itself provides little guidance as to how long or for what reasons election administrators can block access to such ballots, leaving administrators across the state concerned about their ability to appropriately comply.

“If I read this literally as a layman, I think I’m required to provide ballots the day after an election before the results have even been canvassed,” said Chris Davis, elections director in Williamson County, who said such a release would make it impossible for counties to confidently conduct recounts that would stand up to legal scrutiny.

“I don’t know if the drafters of this opinion have a firm grasp on how ballot security and ballot processing is done at the county level,” he said.

The Texas secretary of state’s office said it is still determining how to advise counties to handle the requests for access to ballots prompted by the new opinion. “We hope to issue that guidance within the next week, with the goal of maintaining the integrity of election records while ensuring transparency,” the office said in a statement.

For now, the office has advised counties to follow the direction of their county attorney — the official who would be responsible for either forcing the release of the ballots or prosecuting local officials for giving the public unauthorized access.

“It’s not the attorney general’s opinion that makes it a misdemeanor. So, I guess just tell me what to do, county attorney,” said Davis, who is waiting for his county attorney to offer guidance before he responds to the more than half- dozen requests he’s received since the opinion was released.

Similarly, Lisa Wise, the elections administrator in El Paso County, has seen an “upswing” in requests since Paxton’s opinion. She also says they “are still working on getting direction” from their county attorney, and her office does not yet know how it will handle such requests. Harris County confirmed it has received more than 40 such requests in the last several days, and is, like others, waiting for guidance before proceeding.

Remi Garza, elections administrator in south Texas’s Cameron County, said the decision has put his county “between a rock and a hard place.”

“We certainly want to make sure that we are as open and transparent as possible, but we need to make sure we can protect these records,” he said. Given his current staffing levels, Garza does not believe his office can both accommodate the requests he has so far received and also conduct a sound election in November. “We would definitely have to bring in additional help,” he said.

The ruling comes at an especially bad time for election officials, who are actively preparing for the November midterm elections. Requests to view ballots are particularly burdensome — counties must set up security measures to ensure anyone accessing them maintains the integrity of the cast ballots, requiring resources offices don’t have.

James Slattery, senior attorney with the Texas Civil Rights Project, said election administrators’ “most valuable asset is time. They can’t get more of it. Every day they are closer and closer to an election, and now they are wasting that valuable commodity on a thing that does not help them run the election. And that’s really the impact here.”

In 1988, then-Attorney General Jim Mattox cited state law allowing clerks to “adopt reasonable rules limiting public access” along with federal ballot retention laws and the state’s open records considerations to conclude ballots would be publicly available “after the 22 month retention period.” None of the laws on which he based his interpretation have since been altered by the legislature.

Paxton’s opinion turns this on its head, said Eads, while providing no explanation for why state law justifies such a radical departure from precedent, or even offering an explanation as to why Mattox’s opinion may have been wrong when it was issued.

“You’ve got state offices running their operations based on this statute for now 35 years, and to change it without saying why is wrong,” she said. “[This opinion doesn’t] say what facts have changed that makes the opinion old or invalid.”

Eads said the most likely outcome is a costly lawsuit for counties, who could be sued over their refusal to release documents under decades-old guidance. “If anybody gets access to these ballots sooner than 22 months, this will go to court. That’s going to happen,” she said.

Slattery said he views the decision as a “partisan weapon on behalf of the ‘Stop the Steal movement that he is a part of to continue to undermine elections.” Slattery pointed to Paxton’s previous actions, including his speech at the Jan. 6 rally before the insurrection began and a lawsuit challenging the results of the election in other states.

“The audits that this opinion opens the door to are clearly meant to manufacture conspiracy theories about elections to undermine the public’s faith in them,” Slattery said.

Eads raised questions about the ethics of the opinion. As a current candidate for office, Paxton stands to benefit from the increased access to ballots, and his history suggests he will take full advantage, she said. “He’s got a personal interest in this, and I think he should have recused himself from this and had his deputy make the decision.”

Jessica Huseman is Votebeat’s editorial director and is based in Dallas. Contact Jessica at jhuseman@votebeat.org.

Votebeat is a nonprofit news organization covering local election integrity and voting access. Sign up for their newsletters here.