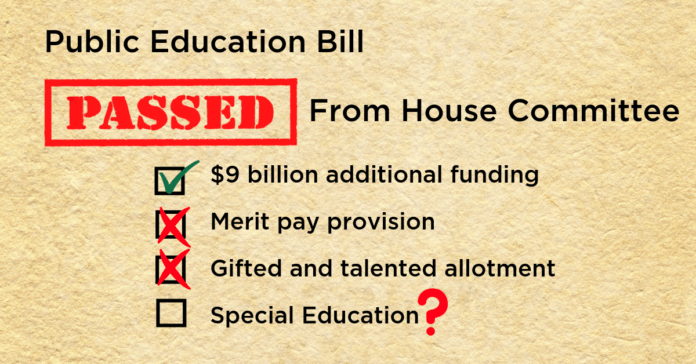 On Tuesday, the House Public Ed Committee voted unanimously to clear a revised school finance plan expected to inject $9 billion of additional funding for public education above enrollment growth.
The introduced bill received a marathon of testimony last week, invoking changes such as the removal of the merit pay provision, which was heavily criticized by teacher unions for having language that “could have been construed to be tied to STAAR,” said Chair Dan Huberty (R-Houston), and reducing the power of the Education Commissioner to make decisions related to school district funding and spending. In place of the funding for merit pay, Huberty said the $140 million will go to an incentive pay program for high need and rural school districts suffering from teacher shortages.
Among the unaddressed concerns in the revised bill is the removal of the gifted and talented allotment and the absence of reforms to the outdated special education weights in the school finance formula.
Several new provisions were added into the bill, including transportation reimbursements for homeless students, an increase in the basic allotment for small and mid-sized districts as it relates to special education, and an efficiency audit for tax ratification elections, where voter approval is needed for school districts to raise property tax rates beyond the 8 percent statutory cap.
Still in the bill is the $6.3 billion in new funding for public education and $3.7 billion in property tax relief through a 4 cent compression in property tax rates across all school districts. The $6.3 billion is accounted in some of the following:

This story will be updated.
Follow Reform Austin for the latest updates on the state’s school finance plan.