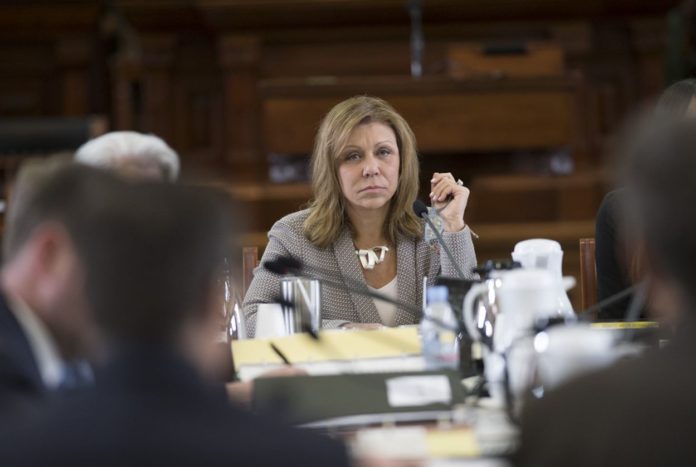 The Texas Senate unanimously passed legislation Monday that is designed to make the Teacher Retirement System pension fund financially healthy, and give a one-time check to retired teachers.
Senate Bill 12, filed by Sen. Joan Huffman, R-Houston, would increase how much the state, school districts and current teachers contribute to the pension fund over the next six years. For the first two years, the changes will cost the state about $555.1 million in general revenue. About $195 million of that money would go toward giving retirees a one-time additional check next fiscal year, of up to $500.
The money for the bill would come from the Senate’s supplemental budget, which the upper chamber unanimously approved last week.
“This plan is far more cost-efficient than simply attempting to contribute one-time contributions of cash every so often,” Huffman said.
Currently, about 420,000 people receive TRS pension benefits; the average person is 71 years old and receives about $2,078 each month, according to an internal 2018 TRS study.
The House is considering a similar piece of legislation, House Bill 9, which would increase the state’s contribution rate to the pension fund and give retirees a one-time additional check of up to $2,400. The cost estimate for that bill has not yet been posted, but it is expected to cost the state more than the Senate’s proposal.
Current teachers pay 7.7 percent of their salaries into the pension fund, while school districts effectively pay 1.5 percent of teacher payroll. That combined funding is dead last in the country among teacher plans. Texas contributes 6.8 percent of total teacher payroll to the pension fund, slightly above the 6 percent minimum. The Texas Constitution says the state cannot contribute more than 10 percent to the pension fund without approval from voters.
The vast majority of Texas teachers do not participate in Social Security, meaning the TRS pension serves as their only source of income after they retire. And they have not seen increases in their monthly pension payments in decades.
Under state law, lawmakers cannot approve an increase in those monthly payments unless the TRS is “actuarily sound” or financially healthy, meaning it has enough money to pay off its debts in less than 31 years. This summer, the TRS’ board voted to lower its expected rate of return on investments, predicting it would earn less money to full fund the pension system.
Both House and Senate bills would increase funding enough to make the system financially healthy, but would not provide automatic cost-of-living increases for retiree payments. Most other retirement systems do have a mechanism to automatically increase contributions, when necessary.
Instead of approving a cost-of-living increase in retiree payments, both House and Senate bills would instead give retirees a one-time “13th check,” beyond the monthly amount they receive.
A couple of lawmakers Monday praised the bill for being fiscally conservative.
“We don’t have automatic [cost-of-living adjustments] which have put other states in significant peril regarding their long-term fiscal picture,” said Sen. Charles Schwertner, R-Georgetown. “This is a prudent step.”
This story originally appeared on the Texas Tribune. To read this article in its original format, click here.