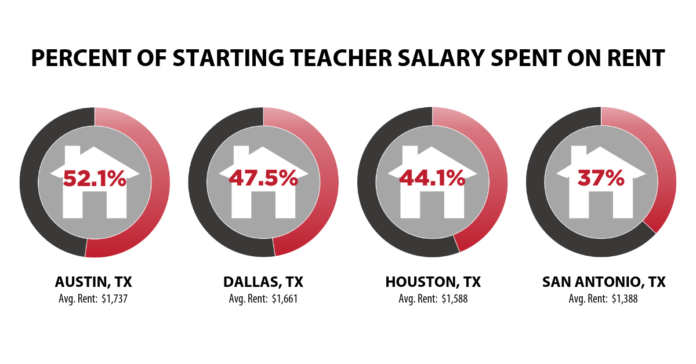 For teachers in Texas, summer break isn’t all it’s hyped up to be. Many educators are forced to take on second jobs to make ends meet. A recent study by Zillow shows how many teachers are struggling to pay rent.

In four of Texas’ major metropolitan areas, new teachers spend over 30 percent of their income on housing, rendering them “cost burdened,” according to the Department of Housing and Urban Development.

Using the Zillow Rent Index, the study examined U.S. Census Bureau income data for full-time pre-K through high school teachers to determine typical local rent rates. Below is the percentage of an individual teacher’s starting salary that is allocated to rent in four of Texas’ largest cities:

The study’s findings show new teachers in Austin, Dallas, Houston, and San Antonio spend an average of 45 percent of their salaries on rent. A starting teacher in Austin would have to spend more than half of their salary on rent.

These findings highlight the inability of Texas teachers to make ends meet on an insufficient salary as Texas becomes increasingly unaffordable.

In Gov. Greg Abbott’s State of the State Address in February, he identified increasing teacher pay as one of five “emergency items.” But results from the legislative session were underwhelming.

This past Spring, teachers rallied at the state Capitol to advocate for more funding for public education and called on the Texas Legislature to provide overdue pay raises for teachers across Texas. While the state did pass school finance legislation in late May, which included teacher pay raises, estimates showed teachers might not receive as much money as they expected.

Organizations like the Texas American Federation of Teachers (Texas AFT) are standing up to advocate the importance of paying educators a fair wage.

“More must be done in the next legislative session to continue increasing teacher pay [in Texas] above the national average,” said Ray McMurrey, Texas AFT Secretary-Treasurer. “Teachers work very long days and nights, it’s shameful that they can’t afford to live in the communities where they teach, forced to drive long distances-removed from the kids that need them most.”

Texas lawmakers must do better. Prioritizing education means investing in teachers and in our children to build a stronger future for Texas.