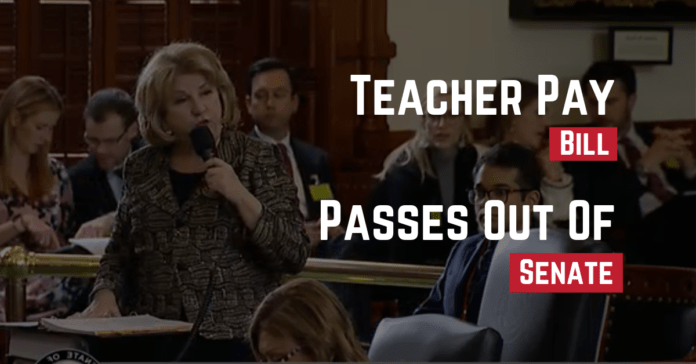 (Pictured: Jane Nelson)
AUSTIN, TX – Monday afternoon, the Texas Senate unanimously passed an amended committee substitute of Senate Bill 3, Senator Jane Nelson’s (R-Flower Mound) plan for teacher pay.
All 31 senators were signed on to the bill as co-authors.
This bill becomes the first piece of legislation the Senate body has voted on among the governor’s six emergency items to send to the House. The lower chamber’s leadership differs on the method of teacher compensation, preferring to instead give flexibility to local school districts to disburse funding.
Nelson reiterated the goal of the bill is to “provide a well-deserved across-the-board permanent $5,000 pay raise to every classroom teacher.” The bill ensures school districts may not use these funds to supplant pay raise.
The bill will also cover the associated cost of teacher retirement. Nelson pointed to Senator Joan Huffman (R-Houston) for additional work on teacher retirement. Huffman filed Senate Bill 12 yesterday, which aims to “help make TRS [Teacher Retirement System] whole.”
“Our teachers are struggling financially,” Nelson said, and nearly one in three teachers in 2012 left the profession after 5 years. She hopes the bill “uplifts the entire teacher profession.”
The key change to the committee substitute came through a floor amendment from Nelson to include librarians for the pay raise. The expected cost is an additional $53 million to pay for a $5,000 across-the-board pay raise for the 5,000 public school librarians across Texas.
In proposing the floor amendment, Nelson acknowledged she did not know Texas required librarians to have two years of classroom experience.
“Librarians are teachers. … I didn’t realize that we as a state require our librarians to have spent two years in the classroom,” she said.
Senator Bob Hall (R-Edgewood) said he blames local school district decisions on why teachers are the lowest paid in their profession. While supporting the bill, he preferred incentive tied to pay and asked Nelson, “how do we get school districts to recognize the importance of the teacher in the system so that the state doesn’t have to take the pay of teachers in the future?”
Nelson said her bill is only one piece of many bills and maintained it does nothing to preclude merit pay.
Democrats also supported the bill while raising concerns of other staff needing a pay raise. Senator José Menéndez (D-San Antonio) spoke to the need of attracting and recruiting counselors because of the increased burden placed on them as it relates to school safety and the mental health of students.
Nelson said again, “Nothing in this bills prevents local school districts from raising the salaries of other staff.”
Senator José Rodríguez (D-El Paso) asked about stipends for teachers in high need areas, such as special ed and bilingual education. Nelson said Chair Larry Taylor’s (R-Friendswood) school finance bill, Senate Bill 4, will take care of that.
Lt. Governor Dan Patrick thanked Nelson for carrying the bill for one of his legislative priorities for the Senate, which he announced in his inaugural speech.
The Senate’s teacher pay bill now heads to the House of Representatives.