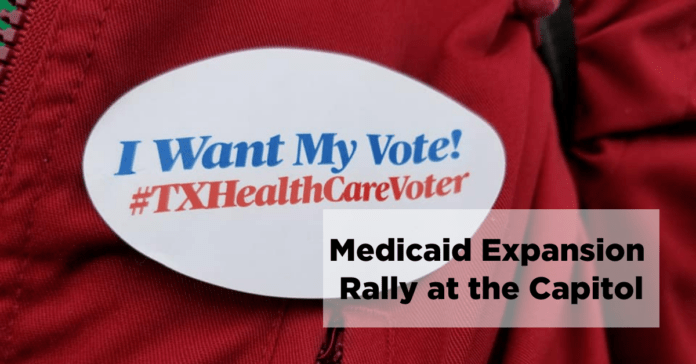 Picture credit: Cover Texas Now
AUSTIN, TX – On March 4th, over 80 Texas residents convened in front of the Texas Capitol to demand lawmakers to let Texans vote to expand Medicaid. The rally was sponsored by a broad swath of organizations ranging from faith-based Texas Impact to Children’s Defense Fund, to the Coalition of Texans with Disabilities, and NAMI (the National Alliance on Mental Illness) Texas.
We have previously reported on Medicaid expansion, the Legislature’s refusal to give any bill a committee hearing, and the potential benefits of the policy to Texas, including insuring over 1 million Texans.
Amid chants of “Let us vote” and “We want healthcare”, the deputy director for the Texas office of the Children’s Defense Fund, Laura Guerra-Cardus, began the rally by saying, “if our leaders won’t support the people’s will, they need to step aside and let the people vote.” Guerra-Cardus sought to dispel the myth of Texans being uninformed on the issue, saying Texans are aware the state has the highest uninsured rate and how it contributes to the worsening of our already high maternal mortality rate. They also know Medicaid expansion can help rural hospitals stay open and stabilize the state’s health infrastructure.
Guerra-Cardus introduced several of the legislators who authored resolutions about expanding Medicaid on the ballot. They included Senator Nathan Johnson (D-Dallas), Rep. Celia Israel (D-Austin), and Rep. John Bucy (D-Austin). The fourth resolution by Rep. Ron Reynolds (D-Missouri City) was filed last week. Also present at the rally were Rep. Michelle Beckley (D-Carrollton), Rep. Donna Howard (D-Austin), Rep. Erin Zwiener (D-Driftwood) and Chair Chris Turner (D-Grand Prairie).
Johnson said the difference between debating this issue now and six years ago is the “lessons of experience”, the data of a dozen states showing the benefits of expanding Medicaid to their citizens, businesses and economy. He said legislators must exercise humility and respect. “We’re not going to take any steps until we have the humility to look at what we are doing and realize that it’s not enough. We’re not cutting it in the field… of caring for our citizens.
“We cannot rest on yesterday’s political inaction… Politics is not an answer for not making progress… Let our legislators know it’s time to pass Medicaid expansion in Texas”, said Johnson. He urged Texans to help get the bills and resolutions to committee hearings.

Rep. Israel said, “because of our inaction, more Texas families are spending their evenings distraught and afraid deciding whether to go to the doctor or pay the basic bills. We put our politics before our people.” She told the crowd, “if we [legislators] don’t show courage to do what’s right, we need to let the voters do what’s right.”
Rep. Bucy said he ran for office because “people at this Capitol [in 2013] opposed Medicaid expansion.” He said there is no reason why Texas should not accept $100 billion into the state economy, lower everyone’s insurance costs, and save lives across the state.
Texans in the coverage gap – an estimated 638,000 uninsured folks who make too much to be eligible for Texas Medicaid but not enough to get federal tax subsidies through the marketplace coverage – also testified to the crowd.
One University of Texas student, Marjorie Gonzalez, shared her story about falling into the coverage gap after she turned 18 and having to struggle with navigating through college without health insurance, in addition to being a first-generation student and a daughter to a single mother. She told the crowd how she would often choose basic necessities over her health needs.
Another Texan in the coverage gap spoke to the difficulties of accessing mental health care without health insurance. When she was 19 years old, she was removed from her mother’s health insurance. Because of a “near fatal depressive spiral”, she moved in with her father in Louisiana.

Due to her lack of coverage, it took her six months to get an appointment with a psychiatrist, who diagnosed her with bipolar disorder and PTSD. She was able to apply for and access Medicaid in Louisiana, but was denied coverage when she moved to Austin. Since moving, she almost ran out of medication and visited the emergency room twice for easily treated conditions when she could not see a psychiatrist. She said the financial instability has been “debilitating”, and the fear of falling ill with no way to pay is a “paralyzing grip” on her life. This put her over $4,000 in medical debt at 20 years old.
The interim executive director of NAMI Texas, Greg Hansch, said this issue is an overlooked part of the discussion on health insurance. People with insurance are over 50 percent more likely to access mental health care than those who do not. He said over 400,000 Texans with mental health or substance use challenges can enroll in Medicaid if expansion funding is accepted by the state.
Earlier, Senator Johnson claimed, “Twenty-nine percent of expansion dollars nationwide goes to people with mental health problems”.
Guerra-Cardus also said 66,000 veterans are in the coverage gap.
One health specialist from San Antonio who works with patients navigating the healthcare system testified to seeing the consequences of being uninsured up close. Young mothers, hard-working Texans, have died because of a lack of health insurance, she said.
John Henderson, a resident from the Pan Handle and a representative of TORCH (Texas Organization of Rural & Community Hospitals), pointed to Texas being “ground zero” for the rural hospital closure crisis. He claimed over 20 rural hospitals have closed in the last six years. “Rural Texans are suffering. The status quo just won’t work. Let the people vote.”
The nearly hour-long rally was followed by the rally-goers heading to legislators’ offices with fliers showing why they should support Medicaid expansion on the ballot.
Meanwhile, one of the 11 Medicaid expansion bills this session, HB 565 by Rep. Garnet Coleman (D-Houston), is being heard before the House Committee on Insurance tomorrow. This will be the first committee hearing on a Medicaid expansion bill in the Texas Legislature since 2013. We will report on the events of the hearing.