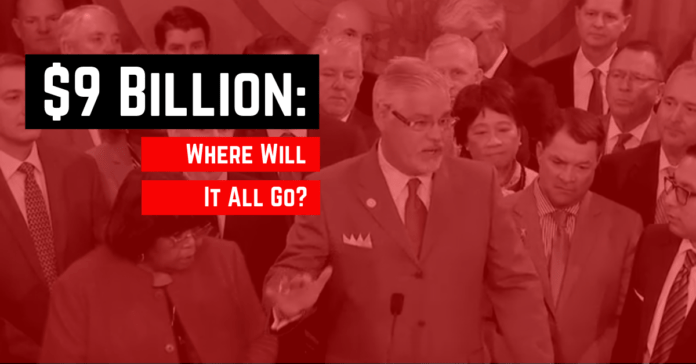 How is it spent?

The House plan sends $6.3 billion to classrooms and $2.7 billion in property tax relief. It achieves the former by raising the basic allotment to $6,030, an increase of $890 for each student, replacing outdated formulas, and boosting investment in low income students. The nearly 200-page document achieves the latter by lowering the maintenance and operations tax rate for all schools by four cents. This tax compression, the first since 2005, will reduce recapture by over $3 billion in the upcoming biennium.
Following through with the School Finance Commission’s recommendations, Rep. Bernal said the bill increases the dual language allotment because it is known to be the “best way to educate ELL [English Language Learner] students.” He also said the bill funds schools that are surrounded by generational poverty to help them overcome that challenge.
Rep. King said there will also be a dyslexia allotment. Huberty said the compensatory education weights have been changed to put more money in the classrooms.
Rep. Allen said the bill demonstrates Texas’ commitment to early childhood education with the addition of an early reading allotment. This will allow all low income school districts to provide “full-day high quality pre-K”, helping economically disadvantaged children and ELL, claimed Allen.

King said the bill “substantially raised the minimum salary schedule” for certified teachers. By placing this language in the statute, it guarantees the state will provide the funds to provide raises, including TRS payments. King also said school districts will have access to $140 million in funding for localized teacher recruitment, retainment programs. The bill will also include funding for teacher professional development.
Chair Huberty said a comprehensive package of incentives for teachers and all public school employees is provided in the bill. For example, everyone who is on the minimum salary schedule will benefit from its increase, such as counselors and librarians.
Also included is a teacher merit pay plan, but unlike the School Finance Commission’s recommendations, Huberty said they will not be tied to assessments like STAAR. He emphasized the bill gives local school districts discretion on how to compensate their employees. Bernal added HB 3 allows districts to get the best talent to the highest need schools.
Supplementing the teacher incentive package of House Bill 3, Chair Greg Bonnen (R-Friendswood) spoke about his plan for the Teacher Retirement System (TRS) contained in House Bill 9 filed yesterday. He said it will make the TRS pension “actuarially sound” by increasing the state’s contribution rate to TRS pensions over time, while keeping active member and district rates the same.

In a response to a reporter’s question comparing HB 3 and SB 3, the Senate’s teacher pay bill, Speaker Bonnen said the following:
“What we’ve laid out today is a school finance plan. I don’t know how you call a $5,000 across-the-board teacher pay raise… with no discussion of reducing recapture, reducing property taxes, no discussion of early childhood education, no discussion of absolutely incentivizing a teacher into going to tougher school to teach. What we have is a plan. … [Teachers] are going to figure out that the Texas House has a winning plan for teachers and students in Texas.”
Chair Huberty said HB 3 is still a “work in progress” and hopes members of the House will make it better.
Reform Austin will explore more of the details of House school finance bill in future articles.