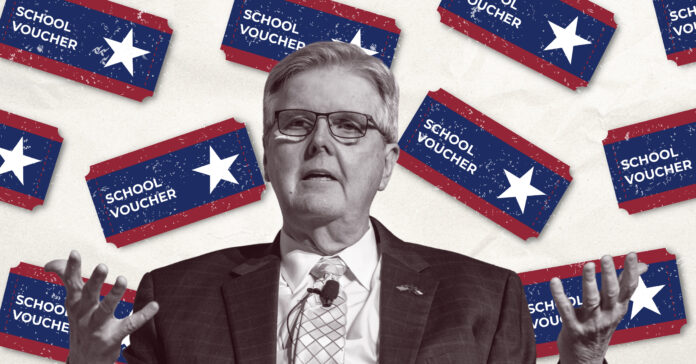 While he did not overtly include private school vouchers on his list, he did include the need to “empower parents by giving them a voice in their children’s education.” Many public school advocates feel that this language might signal support for vouchers.

One reason that Patrick might not have stated direct support for vouchers or “school choice” may be related to his recent election and the people of rural Texas. After a bus tour of rural Texas during the 2022 general election, Patrick promised to “bracket out” rural Texas school districts from any future voucher proposal. With the demographics of the state shifting to more Democrat and swing voters in urban areas, Patrick’s reluctance to directly mention school choice may be a nod to the increasing reliance of GOP members on rural Texans for their votes.

However, public school advocates should not perceive this as news that vouchers won’t be an issue this legislative session. Texas American Federation of Teachers leaders say that it’s not unusual for elected officials to take this approach. “Of course, this is not the first time we’ve seen state leaders soften or obscure language around vouchers and privatization,” reads a recent Texas AFT newsletter, “…something of little surprise given most Texans’ negative attitudes toward the subject.”

Still, with well over 1,000 bills pre-filed for the upcoming 88th Texas Legislature, only two of them are voucher bills. Senate Bill 176 by Sen. Mayes Middleton (R-Galveston) and House Bill 619 by Rep. Matt Shaheen (R-Plano) both provide an insurance premium tax credit that can be transferred to private entities for student vouchers. Both legislators claim that this will lead to greater family empowerment while opponents of the bills say that this is a transfer of public funds to a private entity – something that defines a private school voucher and is expressly forbidden in the Texas Constitution, especially since a recent U.S. Supreme Court ruling that religious schools must be part of a state’s voucher program.

Proponents of public education expect more voucher bills to be filed. “I am surprised that only two have been filed so far,” said Charles Luke, Coordinator of the Coalition for Public Schools. “I expect that we will see more once we get to session.” Luke expressed concerns that vouchers might be filed around culture war issues. “I think the push from the far-right on certain culture war concerns will likely have an effect on vouchers that will be filed. These issues are not rampant in Texas public schools but a great deal of hype has developed around them,” Luke said, “and I am concerned that political pressure may be placed on rural Republicans to separate from traditional alliances and support vouchers around these issues.”

Luke may be right. Earlier this week Rep. Cody Harris (R-Palestine) publicly refused a donation from the Texas State Teachers Association (TSTA) because he was concerned that they are “pushing multiple left-wing ideas.” Harris has historically opposed vouchers and while his refusal to accept funds from the teacher group may not mean that he will also support vouchers, it is evidence that the concerns surrounding culture war issues are straining traditional relationships. The rejection also may have future ramifications for Harris’ base of support among educators as TSTA is the oldest teacher’s association in the state with nearly 70,000 members.

Aside from pressure on House members to distance themselves from public school advocacy groups, there are other questions to consider. Since 1995 the Texas House has been the chamber of the legislature that has consistently rejected vouchers. With pressure on members, will Speaker Dade Phelan be able to hold the line that other speakers have held?

In September Phelan seemed to cast serious doubt on the passage of a private school voucher program in the Texas House. Speaking at a meeting of the annual Texas Tribune “Trib Fest”, Phelan stated, “I haven’t seen a package put forth (for this upcoming legislative session) to say that’s a voucher, that’s not a voucher, but the pure voucher voter has always really failed.”

Other well-placed House members reject vouchers outright. Rep. Ken King (R-Canadian) openly opposed vouchers in a town hall earlier this Fall with strong reasons why he believes they don’t work, including the economic hit to rural schools and lack of accountability of private schools for tax dollars. “I will not be supporting the school voucher system,” King said. “Our school choice is to make our public schools the best they can possibly be. I’ve always felt that way, and I still do.”

King, Rep. Gary VanDeaver (R-New Boston), and Rep. Trent Ashby (R-Lufkin) are often mentioned in predictions from multiple sources that one of the three will be selected as the next Chair of the powerful House Public Education Committee. Both King and VanDeaver are currently members of the committee while Ashby is currently the Chair of the Select Committee on Constitutional Rights and Remedies and a member of the Appropriations Committee. All three are ardent supporters of public education and have historically voted against vouchers. The selection of any one of the three would clearly signal Phelan’s intentions with regard to vouchers. Vouchers have been unpopular in Texas for a number of years because they divert public funds from neighborhood schools to private entities with little or no accountability. They remain unpopular among Democrats and most rural Republicans. Since a significant portion of the Texas House is composed of rural Republican representatives, it makes sense that the body has blocked vouchers for the past twenty years. It makes sense that they block them in the next legislative session as well.