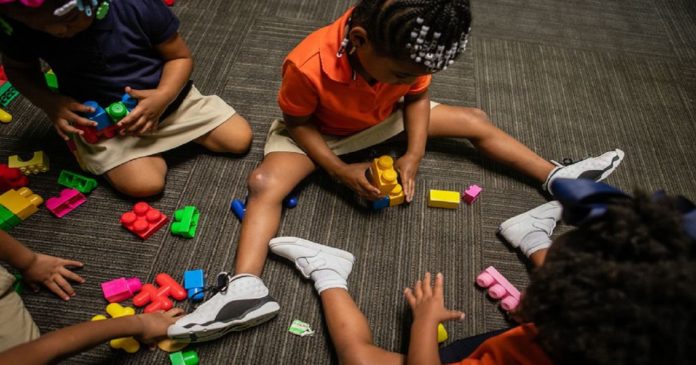 With reported coronavirus cases in Texas child care facilities rising quickly, parents face terrifying uncertainty as they try to decide whether to entrust their children to child care centers.

According to the state health agency, as of Wednesday, Texas children and staff reported 1,695 positive cases at 1,078 child care centers, about 8.8% of the centers open as of this week. About a third of the cases were children, and the rest were staff.

In mid-May, 59 confirmed cases among children and staff had been reported. By the end of June the total had risen to 950, including 307 children and 643 staff.

Whether those numbers should be alarming is unclear.

State health officials are tracking overall numbers but providing little information about where and how the virus has spread in child care facilities. Pediatric experts are sending conflicting messages about how risky exposure to the virus is for children and the adults around them. And the state has only recently required child care centers to follow federal safety guidelines.

That’s giving parents and caregivers little information with which to make informed decisions about their children’s safety.

“Definitely people need to be really cautious and thoughtful and careful. I also think there’s a risk of overreacting and saying, ‘Child care centers are the highest-risk location,’ when actually, it’s not a bar,” said Emily Oster, a professor at Brown University, who conducted what she calls an “unscientific survey” of COVID-19 in 916 child care centers nationwide serving more than 20,000 children. She found that just over 1% of staff and 0.16% of children were confirmed to be infected.

Public health and policy experts say they need more information to know whether the recent jump in cases means Texas child care centers pose an unacceptable risk for children and staff — whether, for instance, people were infected inside the facility, or how concentrated the cases are.

“All we need is a few more numbers to put that into context,” said Dina Tom, a pediatrician at the University of Texas Health Science Center at San Antonio. “I don’t know the answers, but I think the data is there.”

But that information is nearly impossible to get. In response to a public information request from The Texas Tribune seeking a breakdown of total cases by age, geography and race, the Texas Health and Human Services Commission asked the state’s attorney general to agree that it need not release the data, arguing it didn’t have some of the information and the rest was “protected health information” under state law.

(Texas has also leaned on especially strict state health privacy laws when refusing to release names or locations of nursing homes with COVID-19 cases as family members clamored for information.)

The Texas health agency also doesn’t keep data on the number of children in care or staff employed in child care centers, making it hard to know whether 555 infections in children and 1,140 in staff represent troubling numbers. Child care centers have the capacity on paper to take in more than 800,000 children, according to HHSC, but many are reporting much lower enrollment numbers than normal. If child care centers are at half capacity, the 555 Texas cases represent about 0.14% of children in centers, a bit lower than the rate Oster’s survey showed.

“I worry a little bit that people … see a number like 300 cases, and they have in their mind it’s [among] 1,000 kids,” Oster said, referring to the number of cases in children last week. “There are many things about that that are scary. But 300 cases on a base of 300,000 kids is a different thing.”

Meanwhile, much remains unknown about how the disease spreads, especially in children. Public health experts agree children are just as likely as adults to get infected with the virus, but their symptoms are more likely to be moderate or nonexistent. Research hasn’t definitively shown how likely children are to transmit the virus to other children or adults, a troubling prospect for parents and child care workers.

Early in the pandemic, Texas child care centers were closed for more than a month to all but the children of essential workers who staffed the grocery stores and hospitals while other businesses shut down. In mid-May, Gov. Greg Abbott said child care centers could serve anyone, part of his effort to reopen the state’s businesses.

That’s when the cases started to rise. HHSC repealed some of its safety requirements for child care facilities but reinstated them in late June and added a requirement to follow guidance from the U.S. Centers for Disease Control and Prevention. The rules require child care centers to check temperatures of staff and students daily, have parents drop students off outside and not serve family-style meals, on top of their normal regulations.

Asked what the state’s strategy is to address COVID-19 hot spots in child care centers, HHSC and the Department of State Health Services each suggested the other might have the answer. HHSC said it was conducting unannounced inspections of child care centers “as needed,” but did not elaborate. And a spokesperson for DSHS said local health departments, notified of each confirmed case in a local child care center, may be investigating outbreaks in their own cities.

Some child care centers in Austin have had multiple children test positive, said Darlene Bhavnani, infectious diseases epidemiologist at the University of Texas at Austin’s Dell Medical School. In each case, the center was shut down upon getting notification of a positive case and notified parents. But it’s unclear whether children caught the virus in the centers, or whether those facilities were following or missing specific safety protocols.

Austin’s Circle C Child Development Center, which takes children between 8 weeks and 5 years old, notified parents in mid-June that a staff member had tested positive for COVID-19. By June 22, nine staff members and one child had tested positive, according to an email sent to parents and acquired by the Tribune. Child care centers are required under Texas law to notify all parents in writing within 48 hours of becoming aware that a child or employee has contracted a communicable disease such as the coronavirus.

The staff was told that a staff member tasked with disinfecting classrooms after they were used was responsible for the cluster of infections, an executive director confirmed to KXAN-TV last month. The center worked with the county epidemiologist to revise its safety protocols, including requiring staff members to wear masks and practice social distancing with one another. But parents in the affluent neighborhood have already been withdrawing their children from the center, according to the email from the center.

“We’re trying to exceed the state standards, and we think we’ve been doing that,” a Circle C representative told the Tribune, referring to the center’s website.

The state’s new safety rules still allow centers to choose whether they will limit class sizes to 10 or implement social distancing regulations, and no one, including the state, is tracking which centers are following which standards — making it hard for parents who want to make educated decisions. With limited state oversight, experts encourage parents to ask their child care providers if they are following the CDC safety guidelines.

“If you have one case and that center isn’t on top of it, it can easily spread,” said Diana Cervantes, an assistant professor and director of the epidemiology program at the University of North Texas Health Science Center. “What are their plans when there is a positive?”

Experts also warn parents that even the limited data Texas has released may not be complete, since the state has not kept up with demands for testing throughout the pandemic.

“As we see COVID-19 infection rates continue to rise, we are seeing more younger children who are infected,” said Stan Spinner, chief medical officer at Texas Children’s Hospital’s pediatrics and urgent care departments. “Parents need to understand that the rates currently being reported for children in day care may not reflect the true incidence of infection, so parents need to consider this fact when considering if placing their child in a day care is the right choice for them.”

Other states and countries appear to be having limited outbreaks in their child care centers and schools, with transmission primarily occurring among adults.

The American Academy of Pediatrics has leaned on this preliminary data when recommending that students be physically present in schools, weighing the health risk as low compared with the educational and social risks of keeping kids home. It also says that 6 feet of social distancing is not feasible in schools for students, and that masks and frequent hand-washing might be good enough.

But child care centers, unlike schools, are full of toddlers and babies who cannot wear masks or effectively practice social distancing. And unlike some other states and countries, Texas has hit day-after-day highs of new COVID-19 cases, after Abbott allowed businesses to reopen and many Texans gave up on social distancing and masks.

Local and state agencies have adjusted their guidelines as they understand more about how COVID-19 spreads. Still, child care centers say they lack the support, logistical and financial, to keep the virus in check.

John Russo, president of Sprouting Star Children’s Academy in Pflugerville, reached out to his local workforce board when it became clear that a parent whose child had been exposed to COVID-19 was trying to transfer to another child care center with costs subsidized by the state. He was told the government couldn’t notify other centers of potential exposure because of the state and federal restrictions on releasing personal health information.

Since then, the local workforce board in Austin has instituted a two-week waiting period for any families receiving child care subsidies who want to transfer to a different center.

“The way that Austin’s infection rate looks today is different than two weeks ago,” said Tamara Atkinson, chief executive officer of the workforce board. “We’re working hard to translate that information and provide information to our parents.”