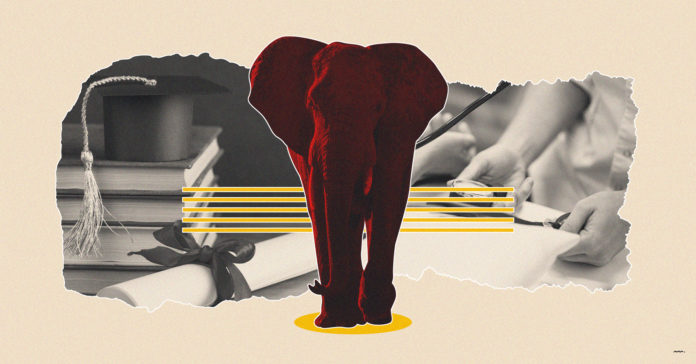 Texas Republicans have made public schools one of their main battlegrounds for regressive politics in the state. Their latest list of propositions from the 2022 Primary make it clear that they are edging into the destruction of public schools as we know them,

The ballot propositions are not a list of proposed legislation (yet), but more of a survey for the most engaged members of the Texas Republican Party. As a list of priorities, they spell doom for public schools.

Not only does the ballot gauge interest in eliminating all property tax while creating no substitute, which funds most Texas schools, but it also renews calls for school choice.

“Texas parents and guardians should have the right to select schools, whether public or private, for their children, and the funding should follow the student.”

These are generally calls for voucher systems that would allow parents and guardians to send their children to private, usually religious schools using taxpayer dollars. Though the Republicans are usually careful not to use the politically charged word “voucher” in their language, it’s a fairly common proposal. The Texas GOP used a similar language in 2017.

Though the majority of the current discourse appears to be about the teaching of critical race theory in public schools and the rights of LGBTQ+ students, the reality is that these are vanguards for the push to a voucher system. Conservative speaker Christopher Rufo, a regular guest on FOX News and champion of Texas’ attempts to censor historical discussion of white supremacy in the classroom, has been the driving force behind much of this.

“We are right now preparing a strategy of laying siege to the institutions,” he said in an interview with Michelle Goldberg. “The public schools are waging war against American children and American families.”

The cold, hard fact is that conservatives find public schools too liberal and want to dismantle the system. Rather than simply paying for their children to attend ideologically biased schools of their choosing, they are moving to splinter the entire public education system. First, by eliminating public tax funding, they cripple the schools’ ability to compete with private tuition institutions. Second, by allowing students to attend private schools with public funding, they further hamper the public schools’ resources.

Finally, the invasion of conservative conspiracy theorists who make violent threats and are stripping libraries of books is causing a brain drain. Teachers and administrators who are sick of the backlash from angered conservatives are leaving the industry.

It’s clear from the 2022 Primary ballot proposals that Republicans have public schools in their crosshairs. Either curriculum will eliminate all social justice, or the entire system will be splintered. The results will be well-funded, conservatively biased institutions and struggling public schools desperately trying to prepare the rest of Texas children for a world that is increasingly hostile to anything but white evangelical conservatism.