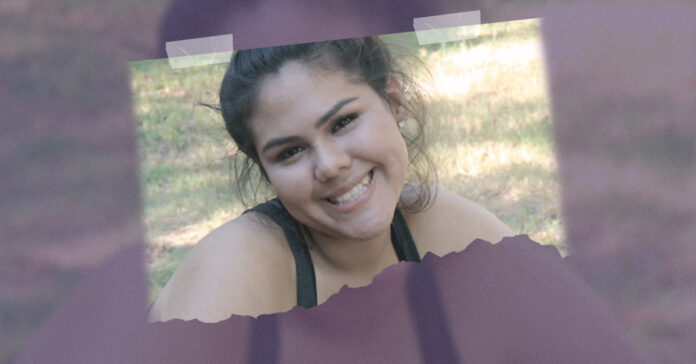 When Erin Castro started dating the young man who would ultimately murder her, the teenager’s family didn’t recognize the signs that she was in an abusive relationship.

“Erin became anxious; she was always worried about getting to the phone on time,” said Rena Castro, her mother. “Her demeanor changed. She had been such a strong-minded, smart, fearless person who had a smile on her face all the time — the kind of person that you just knew was going to go out and take the world on when she got older.”

But the San Antonio teen shifted from confident and outgoing to isolated and withdrawn, afraid of angering Joshua Garcia, the classmate she started seeing in the 10th grade, her mother said. Erin stopped spending as much time with friends, posting pictures of herself on social media and wearing as much makeup, a passion of hers, due to his objections. She tried to end the relationship, her mother said, but always returned to Garcia because he threatened to kill himself during their breakups. Instead, he killed Erin.

On September 2, 2018, he stabbed her and ran her over with his car twice after arguing with her. Erin had just celebrated her 19th birthday hours earlier.

Today, Rena Castro is among the people working to draw attention to teen dating violence, especially during February, National Teen Dating Violence Awareness and Prevention Month. In Texas, this marks the first such month observed after the passage of Senate Bill 9, a law that took effect in December requiring school districts to provide instruction about dating violence and related issues such as child abuse, sex trafficking and family violence. Advocates against domestic violence hope the legislation will enable schools statewide to help youth distinguish healthy relationships from abusive ones, but some have raised concern that parents can opt their children out of these lessons, the result of a last-minute change to the legislation initiated by Texas Gov. Greg Abbott.

Although Heather Bellino, CEO of the Texas Advocacy Project, which fights against dating and domestic violence, does not support the legislation’s opt-out provision, she is hopeful that SB9 will lead more Texas youths to learn about abusive relationships.

“They had already been doing this where the resources and the time was available and also when the need and the requests were coming from the community,” she said. “But there are a lot of underserved and marginalized communities where they do not have the funding or the resources to do this, and without mandating it, it was not happening at schools. So I’m glad this legislation is there.”

Since the 2020-21 school year, San Antonio Independent School District (SAISD) has taught the Real Essentials curriculum to provide students in grades 5-12 with age-appropriate lessons on healthy friendships and relationships. Victoria Bustos, SAISD’s executive director of student support services, said the district decided to offer this instruction based on feedback it received from school counselors about student needs. They especially wanted to reach young students, she said, to give them the foundation to establish healthy relationships in the future.

“The lessons we’re implementing really center around communication and decision-making, cultural influences and what a healthy relationship looks like,” Bustos said. “So, it’s really focusing on the importance of respect around the essentials of friendship, for example, to begin with. The curriculum is broken into different lessons, usually 15-, 20-minute lessons delivered by the school counselor, and this happens for about 10 different lessons. That is one of the foremost curricula that we use to help promote dating violence prevention.”

Rather than solely focus on intimate partner violence, the SAISD curriculum also addresses goal-setting related to college and career plans and the influence of social media.

“The curriculum focuses on a healthy decision-making model that asks students to stop, think and make decisions with intent,” Bustos said. “It asks kids to think about what their life goals are. We try to tie it all together early on developmentally, so that students will be able to know what a good friendship, a good relationship looks like.”

Different districts are responding to the law in their own ways. In Austin, public school officials are currently updating the district’s human sexuality and responsibility curriculum, a process expected to be finalized before the next school year starts in the fall. The subject matter includes healthy relationships, personal safety, identity and puberty as well as lessons on the prevention of child abuse, family violence, dating violence and sex trafficking required by SB9. Parents and other stakeholders will have the opportunity to review the changes made to the human sexuality and responsibility curriculum and provide feedback during public meetings. As the new legislation mandates, parents will also have the ability to opt their children out of any lessons related to dating, domestic or other forms of abuse.

The opt-out provision was added to SB9 after Abbott vetoed an earlier version of the bill that didn’t include this loophole. His spokesperson Nan Tolson said in a statement to The 19th that Abbott “cares deeply for the health and safety of Texas children” but also about “the rights of parents to protect their children.”  That’s why he wanted the legislation to include an opt-out provision for families.

Bellino worries about the ramifications of allowing parents to prevent their children from receiving lessons about dating and domestic violence and human trafficking.

“I do think that having to have consent from a parent will mean that some children that are experiencing abuse in their home, either themselves or watching their parents go through it, will not learn the language or see the red flags that will help them to self identify and make an outcry to the people in the community that we have set up well to be a support system,” she said. “And, therefore, there will be abuses that will continue to occur.”

Bellino said she understands parents want to have input in their children’s education but characterized domestic abuse as a public health issue that young people need to recognize for their safety and well-being. She said that there’s no shortage of age-appropriate learning materials about dating, domestic or child abuse and that educators should be able to use those resources to provide instruction to all students “so that no child falls through the cracks and ends up being abused when we could have helped them.”

San Antonio Councilmember Manny Pelaez also objects to SB9’s opt-out provision. A spokesperson for Pelaez said he believes youth have the best chance of mitigating dating and domestic violence if they are educated about these issues. He’s proposing that the city of San Antonio require schools and universities that receive city funding to teach all students about domestic violence, child abuse and human trafficking. The council is expected to vote on the proposal before the end of the year, a Pelaez spokesperson told The 19th.

“Victims of abuse and domestic violence don’t necessarily have the ability to opt out of that abuse,” Pelaez said in a statement to The 19th. “And there has been a concern both with [myself] and and other stakeholders in Texas that if there is abuse within a household, those households may be less inclined to provide permission for their kid to learn about those things and how they can potentially report that.”

Rena Castro wishes that schools offered lessons on dating violence when she was a teen, so she could’ve passed down the information to her late daughter. Since her three older children never got involved in abusive relationships and she married too young to have much dating experience herself, Castro said she lacked the knowhow to identify the telltale signs of intimate partner violence. She would’ve appreciated “if something like this program would have been around about what healthy relationships should look like and what unhealthy relationships can start like, because it doesn’t always start out ugly,” she said. “It starts out really pretty also, but those red flags are always there.”

For her daughter, “a slow progression” of abuse was followed by intermittent episodes of violence before Garcia’s rage finally turned deadly. When she was murdered, Erin was planning to attend school to become a veterinary technician. “She had all other aspects of her life under control except this [abusive relationship],” Castro said.

To honor her daughter’s memory, she established the Erin Castro Foundation, through which she visits schools to speak to students about the warning signs of abusive relationships. The grieving mother steps up her efforts in February with a 5K in Erin’s honor and visits to school districts throughout Texas in recognition of National Teen Dating Violence Awareness and Prevention Month.

Last year, Garcia was sentenced to 35 years in prison for murdering Erin and 20 years in prison, to be served concurrently, for violating probation stemming from charges related to hitting her with a car in 2016. She did not sustain serious injuries from that incident and did not suspect that it was a foreshadowing of her murder just two years later.

Castro said that her family will never recover from losing Erin, as the teenager’s death completely changed their dynamic.

“Erin was our glue,” Castro said. “She was the peacemaker. I just saw all these qualities of a young woman that was really going to do something with her life. I was so proud of the woman she was becoming.”