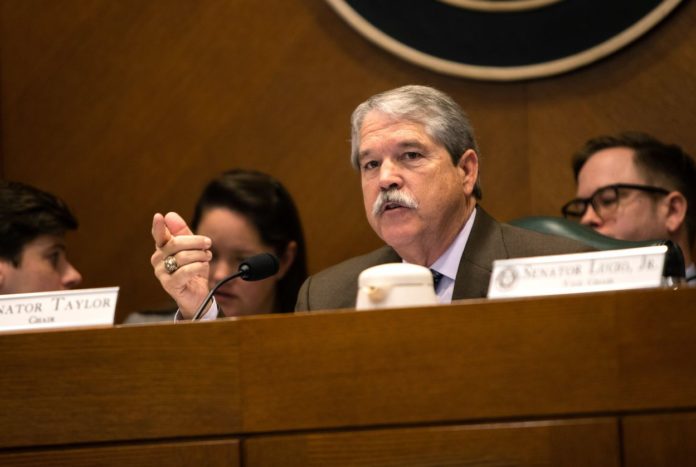 On the night of the deadline to file bills this legislative session, Texas Senate leaders turned in their first crack at legislation designed to reform school finance — rounding out a series of proposals in the upper chamber aiming to address rising property taxes and fix the way the state pays for its schools.
The bill was clearly incomplete and included some placeholder language. But its Republican author, Senate Education Chairman Larry Taylor, said it includes proposals that would fund full-day pre-K, incentivize school districts to improve their third-grade reading performance, offer money for teacher merit pay and increase funding for low-income students. The bill does not appear to require school districts to use standardized tests to determine funding.
Taylor didn’t give an indication of how much the bill would cost, or how it would affect local school district property taxes.
“Our focus should be on improving the academic outcomes of our low-income students, who make up the largest and fastest growing demographic in our public school system,” he said in a statement.
Some of the proposals in the bill appear similar to recommendations from a state school finance commission, which Taylor helped create.
Other school-related bills in the Senate propose giving homeowners a bigger mandated exemption from local school district taxes and giving each full-time classroom teacher and librarian a $5,000 raise. A $4 billion teacher raise bill — Senate Bill 3 — passed the Senate earlier this week.
Any proposals passed by the Senate will have to be approved or reconciled with the House’s plans, which were unveiled earlier this week. The lower chamber’s school finance bill, House Bill 3, would provide $6.3 billion for public education, including an increase in base funding per student, and $2.7 billion for property tax reform.
The first signs of division between the chambers came in a House press conference announcing HB 3, when House Speaker Dennis Bonnen, R-Angleton, indicated the Senate’s teacher pay bill didn’t amount to a plan to fix school finance.
Many education advocates came out early against any proposals that would tie funding for teachers or schools to standardized test performance. Huberty ultimately watered down that language in HB 3, requiring school districts to track elementary students’ progress on reading — but not attaching the scores to any money.
HB 3 would also provide money for school districts that want to design and offer a merit pay program, rating their teachers and giving the top ones additional stipends — modeled on a Dallas ISD program touted by lawmakers. But school districts do not have to use standardized test scores as part of the metric for teacher ratings.
After the bill was filed, Republican Gov. Greg Abbott applauded both chambers for engaging on an issue that he has pushed as a top priority for the 2019 legislative session.
“This session, we will solve one of Texas’ most pressing challenges by reforming our broken school finance system and developing a model that creates a brighter and more promising future for our children,” he said in a statement. “With two pivotal school finance bills filed, we have an opportunity over the next several months to achieve meaningful school finance reform in Texas.”