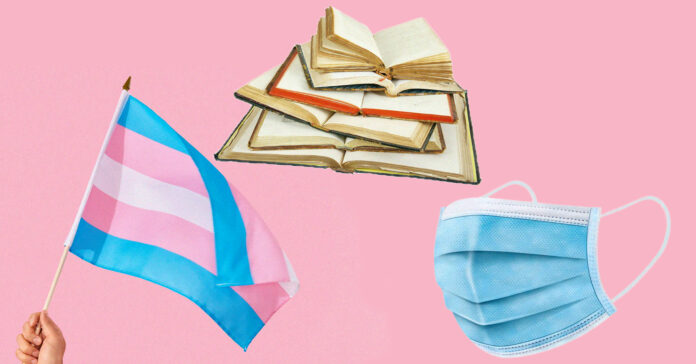 What do masks, library books, critical race theory (CRT), and transgender rights have in common? While this may sound like the beginning of a really bad joke, these are all issues that local school boards across the nation hear about frequently from their constituents. The concerns about these issues aren’t always expressed in the nicest ways, either. In fact, angry expressions over these issues have led to death threats and harassment, leading some school board members to request police protection or to resign their positions. Commonly dubbed “culture war issues” because they are highly politicized, school board disruption has gotten so bad that Saturday Night Live did a skit about it.

In Texas, it’s not just concerned citizens that are complaining. Politicians are cashing in on the fears of their right-wing base by issuing edicts, holding town halls, and leading charges against school districts. State Rep. Matt Krause, Chair of the House Committee on General Investigating, notified the Texas Education Agency that he is “initiating an inquiry into Texas school district content,” according to an article and an Oct. 25 letter obtained by The Texas Tribune. Krause included a list of 850 titles that he believes some people may find objectionable. Krause was then running for Texas Attorney General in a crowded field of candidates but has since dropped out.

Not to be outdone, Gov. Greg Abbott issued his own edict about library books – but to the wrong people. In a November 1, 2021 letter to the Texas Association of School Boards (TASB), he reminded the organization that their members have a collective responsibility to determine if obscene materials exist in school libraries and to remove any such content. When TASB Executive Director Dan Troxell informed Governor Abbott that TASB is merely a school trustee membership organization and has no regulatory authority over schools, Abbott responded by accusing the organization of abdicating their responsibility in the matter and directed the Texas Education Agency, the Texas State Library and Archives Commission, and the State Board of Education to address the issue by developing standards to “prevent the presence of pornography and obscene content in Texas public schools, including in school libraries.”

In their fervor to motivate their base, some legislators are taking it a step further and involving their local communities. Rep. Steve Toth – an evangelical minister and the author of the bill outlawing the teaching of critical race theory – received support in a November 15, 2021, Facebook post from Grace Woodlands Church calling on church and community members to attend a November 16th school board meeting of the Conroe ISD to tell them to “stop the teaching of Critical Race Theory, Trans-Genderism, Hyper-Sexuality, Value Shaming, Political Activism, and Virtue Signaling.” No definition of any of these terms nor any evidence that the district was teaching any of this was provided in the post.

Some policy and legal experts think that folks like Krause, Abbott, and Toth may be in danger of trampling on the first amendment rights of students through their efforts and that politicians are ill-suited to lead in such decisions. “Texas public schools employ certified librarians who carefully choose books to be inclusive of all students,” said long-time education lawyer Blake Powell of the Powell Law Group. “Local school districts have policies in place to allow parents to have choices in their children’s education and to be able to limit what their own children read. Librarians should be allowed to run libraries and teachers should be allowed to teach. Subject matter experts should be driving our curriculum; not politicians.”

Current legal policy is based on the 1982 U.S. Supreme Court case Board of Education v. Pico which allows school boards to remove books because they are pervasively vulgar but not because members simply disagree with their content.

Still, others believe that these efforts are designed to discredit public schools in an overall attempt to privatize them for economic reasons. Carol Corbett Burris, the Executive Director of the National Network for Public Education believes, “The culture war attacks on public schools are just one more front in the war on our neighborhood public schools. Faux grassroots groups are being funded by the same individuals and foundations that promote voucher legislation and the expansion of charter schools. Their objectives are clear–increase unhappiness with public schools; force responsible citizens to resign from boards and, if elected, further gut education funding and support. “

As evidence of this, Burris and others point to a recent fundraising letter by the far right-wing think-tank Texas Public Policy Foundation (TPPF). TPPF sent a November 8, 2021 letter to potential donors in an effort to raise $1.2 million dollars to institute what they call “massive education freedom reforms” by mobilizing 10,000 citizens in each of 60 legislative swing districts in order to “break the indoctrination of our children from Critical Race Theory, ‘gender fluidity’, and socialism.” TPPF claims to already have one donor that has provided $600,000 (rumored to be Tim Dunn of Empower Texans fame. Empower Texans suffered disrepute when they were tied to the surreptitious taping of former Texas House Speaker Dennis Bonnen in an effort to take down twelve Republican House members in the 2020 election primary cycle).

According to TPPF, if they are successful – “Every child in Texas will have an account, held in the Texas Education Agency. Parents will draw from that account for the educational services they choose in the schools they choose. It could pay for add-on services if their child is going to remain in public schools or tuition for private schools of any stripe, faith-based or not faith-based.”

Some believe that TPPF’s vision is pragmatically problematic, citing that the direct provision of public taxpayer funds to private entities, whether they be parents or private institutions is a voucher – something the Texas Legislature has voted down repeatedly since 1995. Additionally, questions of the separation of church and state loom large in the proposal. Under the TPPF plan, Christian and Jewish taxpayers will likely be paying for students to attend Islamic schools; Islamic taxpayers will be paying for students to attend Christian or Jewish schools, and they could all conceivably be paying for students to attend schools run by the Church of Scientology or the Wiccan religion. Based on the comments in their letter, it could be assumed that TPPF supports this type of system – including taxpayer support for a school that teaches atheism.

To make matters worse, very few allegations are supported by factual data by those claiming schools are indoctrinating children in what they consider unsavory issues. Out of the letters and comments of concern previously mentioned only Gov. Abbott and Rep. Krause gave any specifics. Abbott mentioned a few books that were already removed from two school districts out of over 1,000 districts in the state and Krause mentioned his list of titles – many of which don’t qualify for removal under the aforementioned federal law.

These efforts in Texas follow a national push by extremist politics to take over school boards based on allegations that districts are teaching critical race theory. The Center for Renewing America, run by former Trump administration official Russ Vought, distributes a toolkit that encourages conservatives to “reclaim” their schools by taking over local school boards through campaigns focused on opposition to critical race theory. The Leadership Institute offers training on how far-right candidates can take over their school board and runs a program called Campus Reform which encourages students to “expose the leftist abuses on your campus” including the teaching of CRT.

Funded by wealthy donors and far-right-wing foundations, they seem to be having some success in Texas. In places like Cypress-Fairbanks ISD – the third-largest school district in the state – long-term and well-established trustees are being replaced over culture-war wedge issues like CRT.  After a controversial “Resolution Condemning Racism” was approved by the board of trustees in September of 2020, Rev. John Ogletree – an African American – was defeated amidst allegations that the district was promoting CRT.  Ogletree is the founder and pastor at the First Metropolitan Church in Houston, Texas, and the president of the board of Pastors for Texas Children (PTC) – a statewide public school advocacy group. Ogletree had been a member of the Cypress-Fairbanks ISD Board of Trustees since 2003.

Not everyone is silent about the far-right efforts. Rev. Charles Foster Johnson, Executive Director of PTC responded to the defeat of Ogletree by saying, “For Godly Christian servants like Rev. John Ogletree to be slandered with lies about his character is beyond outrageous. It is morally despicable. Rev. Ogletree is a faithful pastor who discharged his responsibility before God to call out racism. He did so with obedience and courage. It may come as a news flash to the morally confused folks at TPPF, but it is not racism to call racism for the sin it is: racism.”

According to staff writers for Reform Austin, “This appears to be a nationwide strategy by conservatives to take over school boards and cultivate a farm team of candidates for higher office.”  If that’s the case, there could be plenty of opportunities for far-right candidates in 2022 to get elected. With several Texas Senators and over two-dozen House members deciding not to run again due to redistricting maps, the field could be wide open for ultra-conservative candidates launching campaigns on the back of these attacks on public schools.

Indicative of this is the fact that leaders of both committees for public education in the Senate and the House are not returning to Austin. Sen. Larry Taylor – Chair of the Senate Education Committee has resigned in the face of stiff opposition by Rep. Mayes Middleton for his Senate district. Middleton was allegedly recruited to run against Taylor by Lt. Governor Dan Patrick – Taylor’s boss. In the Texas House, long-time former Chair of the House Public Education Committee, Rep. Dan Huberty will not return. Both Huberty and Taylor have years of experience chairing their respective committees and their departure will undoubtedly leave leadership and power vacuums.

With the filing deadline set for December 13, 2021, the complete list of candidates for offices is not yet final but it looks like those wishing to ride to success from the current culture wars are positioning themselves quickly.

Overall, Texans are more satisfied with public schools than before the COVID pandemic – the majority rating them an A or a B with 78% indicating that their school’s learning models are very effective or somewhat effective. There seems to be little to no evidence for contentions that the schools are failing or that many of them struggle with the issues raised by the far-right wing. If Texans want to preserve the common good that they receive through their public school system, they will vote for pro-public education candidates.