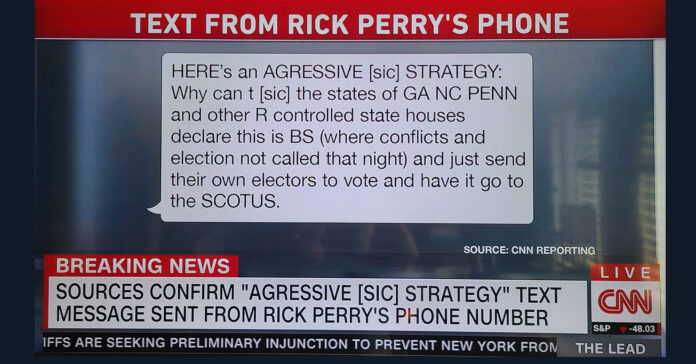 CNN is reporting that a now-infamous text message released earlier this week by the House Select Committee investigating the Jan. 6 attack on the U.S. Capitol came from former Texas Governor and Energy Secretary Rick Perry. The text message was sent to then-White House chief of staff Mark Meadows and urged an “AGRESSIVE (sic) STRATEGY” to thwart the will of the voters in three states and award the states’ electors to Donald Trump. The message was sent the day after the 2020 election, while votes were still being counted. The message reads:

“HERE’s an AGRESSIVE STRATEGY: Why can t the states of GA NC PENN and other R controlled state houses declare this is BS (where conflicts and election not called that night) and just send their own electors to vote and have it go to the SCOTUS.”

Several independent sources have confirmed the phone number belongs to Perry. A spokesman for Perry says that the former governor denies having sent the text. When asked how it came from Perry’s phone, the spokesman had no explanation.

The message generated a great deal of attention this week when it was released by the House Select Committee, along with 6,000 other documents turned over by Meadows.

The message was read aloud on the House floor Tuesday evening by Maryland Rep. Jamie Raskin as an example of evidence that required further context from Meadows, who has defied a subpoena to appear before the committee.

“How did this text influence the planning of Mark Meadows and Donald Trump to try to destroy the lawful electoral college majority that had been established by the people of the United States and the states for Joe Biden,” Raskin asked. “Those are the kinds of questions that we have a right to ask Mark Meadows.”

The text implies a premeditated enthusiasm to subvert an election before the results were even known.

In 2016, while running in the Republican Presidential Primary, Gov. Perry warned of the corrupting influence of Trumpism when he warned, “Donald Trump’s candidacy is a cancer on conservatism.”  He quickly added that “it will destroy a set of principles.”