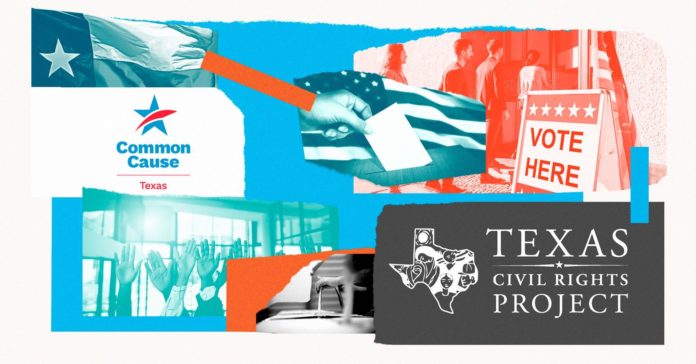 Some voter trepidation is to be expected in the 2020 election cycle. The state’s recent poor handling of voter identification requirements and polling irregularities are enough to make a person pause before going to early vote or prior to making the trip on Election Day.

But there is cause for peace of mind. Several grassroots groups are looking out for Texans’ best interests this election season. This collective of organizations has tasked itself with minimizing issues at polling locations throughout the state.

Common Cause Texas is one of more than 30 groups participating in the Election Protection coalition, which includes the Lawyers’ Committee for Civil Rights, the Texas Civil Rights Project, the League of Women Voters of Texas and the ACLU of Texas, the Fort Worth Star-Telegram reported.

Amanda Gnaedinger, deputy director of Common Cause Texas, told Reform Austin her organization has election protection volunteers at polling sites throughout the state “to help answer questions that voters have and to track and identify issues that are happening on the ground.”

“Most of the work we do at Common Cause is kind of revolving around the field program of the larger election protection team,” Gnaedinger said.

She noted there are nearly 6,000 polling locations in Texas. That’s a lot of ground to cover. They presently have 300 trained volunteers and hope to have coverage in one-third of the sites by the November general election.

The Texas Civil Rights Project trains and deploys nonpartisan poll monitors at polling locations throughout the state, where voters can engage them outside of the polling place to ask questions or be directed by a monitor to use a hotline (1-866-OurVote).

“Many of the issues voters face at the polling place itself are mistakes,” said Rose Clouston, voter protection director at the Texas Democratic Party, which isn’t a part of the coalition. “We have a huge election infrastructure that is in place for one day only. … So there’s just sometimes confusion or mistakes that happen in terms of someone not being found on the voter rolls … and having to jump through some additional hoops or someone not being offered the opportunity to vote because if they don’t have ID.”

Reform Austin called the Republican Party of Texas, which declined to comment for this article.

People encountering any obstacles while exercising their right to vote can be assured the coalition will assist them with any issues, Gnaedinger said.

According to a 2019 Texas Civil Rights Project report, more than 275,000 voters were adversely impacted by election administration issues in 2018. The report also revealed that 262,647 college students lacked an accessible place to vote on campus and provisional ballot complications nullified the votes of at least 10,831 eligible people because they voted in the wrong location on Election Day.

”Republicans in Texas have spent the better part of last decade putting up hurdles to the voting process,” Clouston said. “From reducing opportunities to start early voting to adopting strict voter ID requirements that were only rolled back after a lengthy court battle. Our focus is to ensure that none of these hurdles prevent voters from having their voices heard at the ballot box.”

If any situation goes completely awry, Stevens said, the third tier of their three-tier approach — besides the hotline and poll monitors — is a group of lawyers available in case escalation to a legal action becomes necessary. She cited a lawsuit they filed against Harris County on Election Day 2018 for failing to open some polling locations on time and requesting that those same locations be allowed to remain open longer. The situation prevented 1,512 people from voting. Stevens said they have received questions about voter registration issues mostly relating to registering on the same day as voting.

However, this primary season has been mostly uneventful, Gnaedinger said. The group has tracked primarily normal poll-worker errors pertaining to information, “but nothing that has been completely out of left field or unexpected in terms of problems we’re hearing at the polls.”