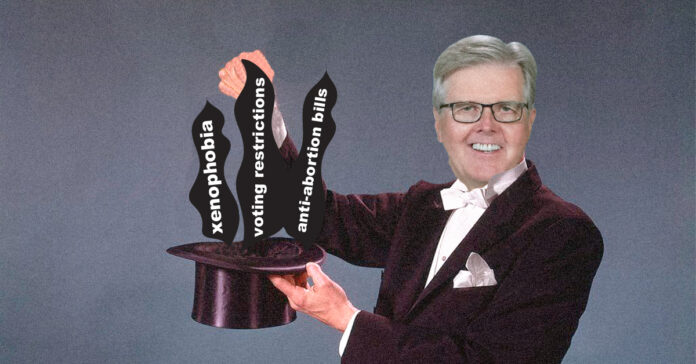 Since George W. Bush left Texas to be president, no man in state Republican politics has been as effective at pushing far-right conservatism as Lt. Governor Dan Patrick. He has surfed the red wave of extremism at a level even figures like Greg Abbott and Ken Paxton have failed to match. In many ways, he is the walking avatar of Texas conservatism.

Patrick rose to power through the media rather than through usual government channels, beginning his life as a talk radio host. Not as magnetic (or deluded) as Alex Jones, but less abrasive than Michael Berry, Patrick became a state senator in 2007. At the time, he seemed like a kook or a recidivistic throwback. America was already falling out of love with Bush’s wars and the untruths that led to them. While the nation was getting its first look at a progressive young politician from Illinois who offered hope and change, Patrick’s anti-abortion bills and blatant xenophobia in the Texas legislature struck a discordant chord. Who was this yammering caveman?

It turned out that Patrick already knew what the country would shortly learn. The election of Barack Obama, as well as the eventual loss of the marriage discrimination battle, led to what’s been dubbed the whitelash. The country was ripe for a conservative counterattack that abandoned the statesmanlike decorum of John McCain and embraced something a little more rebel radio.

At first, Patrick was mostly an annoyance, with his fellow senators referring to him as an “uninvited picnic guest who shows up with nothing in hand, eats all the potato salad, and spoils the picnic for everyone else.” Patrick bided his time, winning small victories of a white Christian nationalist bent and building a reputation as a maverick.

By 2014, Patrick had ridden the Tea Party express into the Lt. Governor’s seat, a place of power equal or perhaps even exceeding the governor as the office controls the bills that the Senate votes on. With de facto control over the entire legislature, Patrick proved himself a conservative wizard. He was able to bring on an advisory group from his Tea Party cronies to bolster the far-right lurch he wanted to institute, but he was also able to throw them under the bus the second they annoyed Governor Greg Abbott. He would land a similar switch kickflip by backing Tea Party darling Sen. Ted Cruz in the 2016 election then seamlessly transitioning to a hardcore Trump cheerleader.

Meanwhile, he managed the ship of state like a man weaving through rocks in a bay he has sailed all his life. Though he has occasionally angered both the establishment Republicans and the angrier far-right at different times, he rarely misses an opportunity to push the agenda further into the red. He knows that the invigorated Trump base wants reproductive rights curtailed, progressivism in schools, hamstrung, taxes lowered or obliterated, and undocumented immigrants punished. He’s managed to accomplish all of these to some degree thanks to his intuitive knack for knowing when to push and when to put on the brakes.

He’s avoided the legal woes of the attorney general as well as the anger of the base that has Greg Abbott scrambling for support after doing anything at all to fight COVID. Even as his closest peers fight for their political lives in the Republican Party, Patrick remains almost universally beloved by all stripes of conservatives.

The only thing that can stop him is a complete shift change in Texas politics. In 2018, he barely held onto his seat in fairly low-profile race, winning with only 51 percent. The fear of a purple Texas is the only thing holding Patrick in check, which explains his undying support for voter rights and access restrictions that could tip the state for Democrats. Luckily for him, his desires there perfectly match the fully formed neo-fascism of the modern Republican party… something he was part of the alpha build of fifteen years ago. Love him or hate him, there is no arguing that Patrick is a true seer of conservatism, and everyone should follow his beacon very closely.