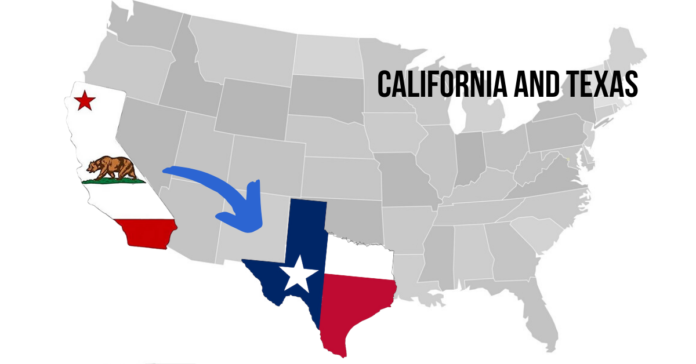 Trademark to Texas is a unique brand of state pride and patriotism.

Today’s iteration, according to some: “Don’t California my Texas.”

Texas’ population is growing, and large swaths of people are moving to the state, with the greatest number coming from California, according to recent census projections.

And while the Texas born population itself is booming, domestic migration makes up a significant portion of Texas’ growing population.

Over the past decade, California has seen an outflow of its residents. According to The Economist, in a 10-year span, a quarter of Californians leaving the state relocated to Texas. In 2018 alone, that number included more than 86,000 people.

Alongside this trend, conservative politicians have created a narrative suggesting that their political views are the true Texas values, in opposition to California “far-left policies.” In 2018, during Gov. Greg Abbott’s re-election campaign, a petition was posted to his website that stated, “don’t California my Texas”.

This phrase represents a partisan resistance to change and attempts to pit residents of the two states against each other.

As the nation’s most populous states, California and Texas represent polar ideologies in an increasingly partisan nation. Dr. Mark Jones, fellow in Political Science at Rice University, discussed the two states in this way:

The idea that Texas could become California is useful rhetoric for politicians hoping voters will maintain the status quo.

“It’s a base priming activity,” says Dr. Brandon Rottinghaus, professor of Texas Politics and Political Communication at the University of Houston. “[The phrase] is a political signal about what is happening. A generic way to say that California’s progressive politics don’t have a place in Texas.”

For years, California’s congressional delegation was highly competitive, and for a majority of California’s history, the state leaned Republican. However, over the past 25 years California’s politics transformed from competitive to dominated by the Democratic party.

And according to Dr. Rottinghaus, this concerns Texas’ conservative politicians.

“There is a perception that California has moved to the left in terms of its economic and social policies and they don’t want to see Texas move in that direction,” says Rottinghaus. “The arc of political change in California moved so rapidly from Republican to Democrat that I think it worried a lot of big urban red states, including Texas.”

“Part of the reason, I think that [Gov. Abbott] uses that phrase is to signal that the state could easily turn blue if Republicans don’t act like Republicans.”

One thing is clear—the demographics of Texas are changing.

The tension between what Texas is and what it has come to be defined as is ever expanding, and Texas Democrats and Republicans will be waiting to see if the 2020 election changes that definition.