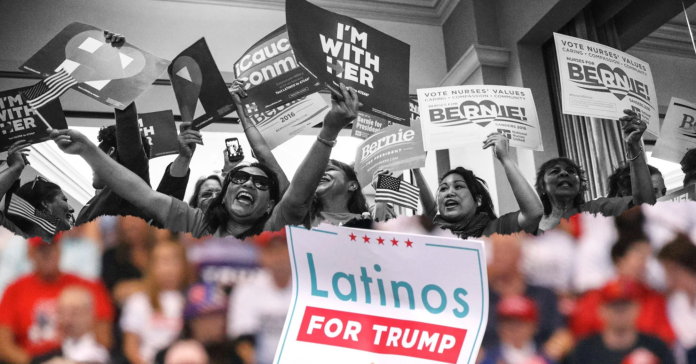 Popular wisdom for decades has been that as Texas progresses to a minority-majority state thanks to a growing Latino population, it would grow less conservative and more liberal. While that has happened, former President Donald Trump made significant inroads with Texas Latinos, and the number is only growing.

The movement is sometimes quite dramatic. Hillary Clinton carried Zapata County, which is 95 percent Latino, by 33 percent in 2016, but in 2020 Trump won it by 5 points. Trump flipped four majority-Latino Texas districts, and even pulled a swing in Laredo, one of his few big city victories.

It’s a problem for Democrats, and there is no simple solution.

Russell Contreras at Axios has put together an intriguing set of statistical explanations why a traditionally liberal voting block is growing more conservative, even amidst the increasing race-bating and anti-immigrant sentiment of Trumpism and its followers in state government.

One metric is religion. Latinos are increasingly moving way from Catholicism, which has generally been a Democratic voting block and the religion of the current president. Currently, around a quarter of Latinos are evangelical protestants, but that number is predicted to double by 2030. Considering that evangelical protestant churches are the backbone of the conservative movement, it’s hardly surprising that they are instrumental in flipping Latinos.

Two, Latinos in south Texas are much more likely to derive their income from oil and gas or law enforcement. The Eagle Ford Shale formerly represented big opportunities for workers, but has been in significant decline since 2015. With Democrats focused on renewable industry, it’s likely that many Latino workers in south Texas feel that Republicans may save their jobs.

The relationship with law enforcement is more complicated, and has a long, messy history going back nearly a century. The U.S. Border Patrol is minority-majority, with 50 percent of its force being Latino. For all the very real criticisms that the Border Patrol is a tool of white supremacy, many of the agents most dedicated to border security are themselves not white.

Support of law enforcement has led to a very nasty rift in Latino circles according to polling. Like the Irish in the late 1800s, many Latinos have joined law enforcement as a path to parity, even as the law is unfairly used on their communities. While a majority of Latinos still believe that it is more important to help those fleeing violence and unrest in other countries, around 42 percent believe tougher border policies are the answer.

With Republicans hammering hard on stopping border crossers and accusing Democrats (falsely) of defunding the police, it’s little wonder that some conservative Latinos are being successfully courted to the right despite the blatant racism often on display. It’s a large enough shift that Democrats cannot pass it off as a few malcontents. It’s possible that Beto O’Rourke, himself a south Texans with deep roots in Latino communities, may turn around the tide, but for now it’s clear that some Texas Latinos are ready to switch teams.