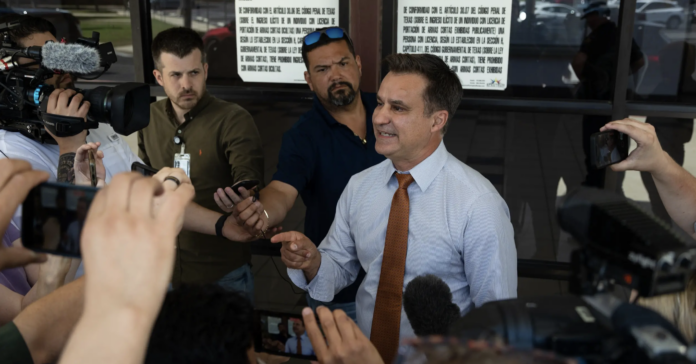 A state district judge ruled Wednesday that the Department of Public Safety does not have to turn over records related to the Uvalde school shooting sought by state Sen. Roland Gutierrez, who had sued the state police in hopes of securing them.

The order by Travis County 419th Civil District Court Judge Catherine A. Mauzy was narrow, however, and sidestepped the question of whether the state police can withhold records concerning their response to the May 24 massacre at Robb Elementary School. Mauzy concluded that Gutierrez had not properly filed his request under the Texas Public Information Act, the state’s public records law, and therefore DPS was not obligated to fulfill it.

Still, the outcome grants a reprieve for the state police, who have fought to keep secret the details of how 91 officers responded to the shooting. Gutierrez, whose district includes Uvalde, wrote a letter to DPS Director Steve McCraw on May 30, requesting the agency’s training manuals as well as any documents that detail how the state police responded to the shooting that day. In a hearing last week, DPS officials said that request should have gone to the agency’s media relations office.

Gutierrez said Wednesday he disagreed with the ruling and suggested the state police were simply looking for an excuse not to comply with his request. The lawmaker has been among the most critical state officials of how DPS has handled the shooting.

“It is most absurd that Department of Public Safety continues to fight even the most benign distribution of documents, like a training manual,” Gutierrez said. “And they refuse to do it because they’re culpable of their negligence and malfeasance on that day.”

At a hearing in the case last week, the district attorney for Uvalde County urged the judge to side with DPS. The prosecutor, Christina Busbee, said since late May she has asked all government agencies not to release any information about the Uvalde shooting, for fear of compromising ongoing investigations by the Texas Rangers, a division of DPS, and the FBI.

Since then, several government agencies, including the state police, have declined to fulfill records request filed by The Texas Tribune. Many cited an exemption in the state’s public records law that allows documents to be withheld if they relate to an ongoing investigation.

DPS has not always followed Busbee’s request, however. McCraw on June 21 testified for more than four hours in front of a Senate committee investigating the shooting. He placed much of the blame for the delayed police response to the shooting on the Uvalde school district police chief, Pete Arredondo, and spent little time detailing the actions of state troopers.

A separate lawsuit against DPS, filed by a consortium of news organizations including The Texas Tribune and ProPublica, seeks to persuade a judge to compel the state police to release Uvalde records that the journalists submitted under the public information act. That case is ongoing.