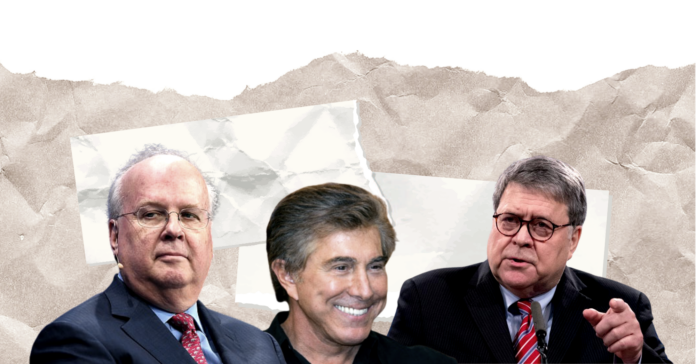 Last week, several top conservative Republicans launched a legal group with the intention of pursuing “election integrity laws” in states across the country.

In an interview with Reuters, Burchfield said the group was created in response to expanding court fights over election laws.

“We do not think the courts should be setting the rules for elections. We believe that’s the province of state legislatures,” Burchfield said.

Burchfield also claimed the group was not affiliated with former President Donald Trump, and does not support particular candidates. He said the groups’ members reject claims made by some other conservatives that the 2020 election is illegitimate due to mass voter fraud.

However, the restrictive laws they intend to support are premised on the same lies that fuel Trump’s election claims: that mass voter fraud does exist. After all, it was Barr who suggested to Trump the use of mail-in ballots invited fraud in the lead-up to the 2020 election. And according to NBC, Rove has a long history of anti-democratic election schemes.

The nonprofit also told Reuters it was not a “foil” to Democratic lawyers like Marc Elias, who left law firm Perkins Coie last year to start his own practice regularly litigating over election laws.

Nonetheless, Elias himself seems to think the group poses a threat. On Thursday, he told Reuters he believes the new organization is “fundamentally about making voting harder and opposing voting rights.”

He said that the state laws the group defends are falsely premised on the idea that fraud is rampant in U.S. elections.

One of the briefs was filed in June before the Montana Supreme Court and supports reinstating several new voting laws blocked by a judge in March, including ones eliminating same-day voter registration and heightening voter identification requirements in the state.

The second brief was filed Tuesday in the U.S. Court of Appeals for the 11th Circuit supporting a Republican-backed Florida law that restricts the use of drop boxes and third-party organizations’ ability to collect voter registration forms.