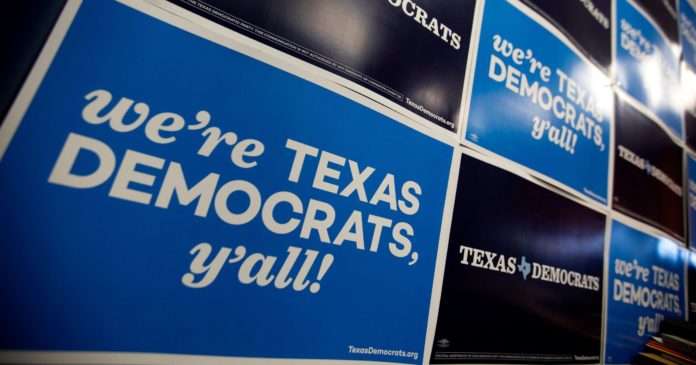 The national Democratic super PAC Forward Majority is doubling its spending to flip the Texas House, bringing its commitment to over $12 million.

The political action committee said in early September that it would drop $6.2 million to help Democrats capture the majority. But in an announcement first shared with The Texas Tribune, Forward Majority said it is now surging its spending to keep up with Republicans in the homestretch of the fight to control the lower chamber ahead of the 2021 redistricting process.

The Republican State Leadership Committee, the chief national GOP group focused on state legislative races, had vowed to top Forward Majority’s initial $6.2 million investment, and it raised $5.3 million into a Texas-based account between July 1 and late September. Of that haul, $4.5 million came via GOP megadonor Sheldon Adelson and his wife, Miriam.

“The RSLC and Karl Rove aren’t going to call the shots in Texas in this election,” Forward Majority spokesperson Ben Wexler-Waite said in a statement, alluding to both the national GOP outfit and a state-level PAC with which Rove, the famous party strategist, is working. “Republicans are hemorrhaging millions on Texas state house races because they know their majority is in grave jeopardy and that this is the most important state in the country for redistricting.”

Democrats are nine seats away from the majority, and they also have to defend the 12 seats they picked up in 2018. Forward Majority has been exclusively on offense, targeting its original $6.2 million effort at 18 Republican-held seats.

Forward Majority said its spending surge was prompted by millions of dollars in TV ad buys by Republicans in some of the most competitive districts, such as those of Republican Reps. Jeff Leach of Plano, Angie Chen Button of Richardson, Morgan Meyer of Dallas and Sarah Davis of Houston. In two of those districts — Meyer’s and Davis’ — Forward Majority is teaming up with Everytown for Gun Safety, the national anti-gun violence group, to try to counter increased GOP ad spending.

Everytown said it is spending $600,000 to support Forward Majority’s advertising against Meyer and Davis — as well as to launch its own TV ads opposing three-Dallas area GOP lawmakers: Meyer, Button and Rep. Matt Shaheen of Plano. Those commercials target the lawmakers for not supporting proposals to stem gun violence, such as background checks on all gun sales.

The ramped-up spending plan by Forward Majority reflects just how fiercely competitive the fight for the majority has become. While Democrats had plenty to boast about on the latest campaign finance reports, Republicans in general had more money to spend heading into late September, and they are getting seven-figure aid in the final weeks from not just the RSLC but also Gov. Greg Abbott’s campaign.

“We’ve long seen several paths to flipping the Texas House and we will continue to do everything we can to ensure Democratic legislative candidates aren’t drowned out by millions in special interest money,” Wexler-Waite said.