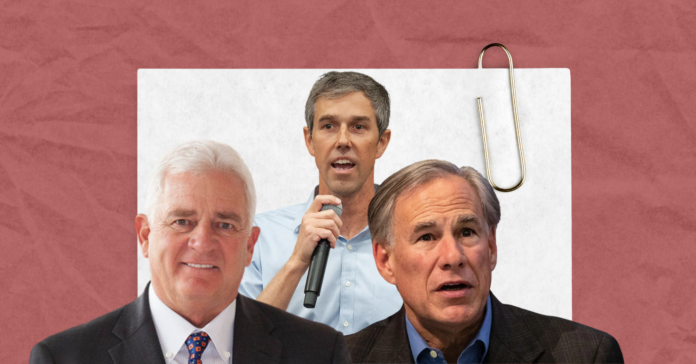 The legal fight has moved into a state appeals court, where O’Rourke is seeking to dismiss Kelcy Warren’s defamation lawsuit or remove the case from the energy executive’s county of choice.

Warren sued the Democrat in February, alleging that O’Rourke is trying to “publicly humiliate him and discourage others from contributing to Gov. Abbott’s campaign.”

The lawsuit aims to get more than $1 million in damages and was filed in San Saba County, about 100 miles northwest of Austin. In it, Warren also accused O’Rourke of making baseless claims that Abbott sought to benefit Warren’s company, Energy Transfer.

Since the Texas power grid failed thanks to the deadly winter storm, Uri, O’Rourke has been calling out Abbott. “We are all paying the price for this guy’s corruption and his incompetence,” said the former Congressman from El Paso.

Shortly after the winter storm, the governor accepted a $1 million dollar donation from Mr. Warren, the chairman of the board at Energy Transfer, and O’Rourke accused Abbott of going soft on efforts to protect the Texas power grid – Warren’s company made an additional $2.4 billion last year thanks to the storm when the state’s grid manager pushed power prices sky-high to end rolling blackouts.

“O’Rourke has repeatedly stated, with no basis in fact whatsoever, that Warren ‘broke the law’ and committed felonies — extortion, bribery, and corruption — when he purportedly ‘bought off’ Governor Abbott not to fix the power grid in Texas so that Energy Transfer supposedly could make money in the event the grid failed,” the lawsuit reads.

This week, O’Rourke made the same request to the Austin-based 3rd Court of Appeals, arguing that he exercised his free speech rights protected by the Texas Citizens Participation Act.

The state law protects against retaliatory lawsuits that seek to intimidate or silence speakers on matters of public concern.

“This is a frivolous abuse of the judicial system to silence political debate,” O’Rourke’s appeal said. “O’Rourke’s colloquial use of sharp words to describe a gas industry billionaire making a $1 million contribution days after the governor signed legislation containing a loophole favoring the gas industry is protected political speech and is not defamatory.”

On Wednesday, O’Rourke filed a second appeal at the 3rd Court, which argues that if the lawsuit was allowed to continue, it should be moved from San Saba County.

According to Austin American-Statesman, the proper venue could be an important consideration for a case with political implications. In the 2020 election, San Saba voters favored Republican Donald Trump over Democrat Joe Biden by an 8-to-1 ratio, while Trump was soundly rejected by voters in Dallas and El Paso counties.

Warren has become one of Abbott’s biggest donors. Since 2019, he’s given Abbott nearly $1.3 million for his re-election. He has been one of Abbott’s top four donors since 2019, according to state campaign finance records.