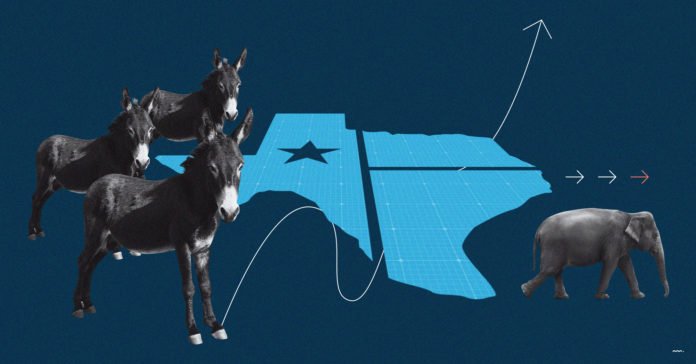 It’s been 30 years since Texas’ 38 electoral votes went to a Democrat. This year may be the year that trend is reversed. Most recent polling of likely Texas voters still gives President Donald Trump a small lead over former Vice President Joe Biden in Texas, but Biden’s improving position with Hispanics and a surge of early voters indicate the Lone Star State could go either way.

The highly respected Cook Political Report says the race is too close to call, moving Texas from leaning red to being a toss-up state.

“Texas is a state that Biden doesn’t need to win, but it is clear that it’s more competitive than ever,” writes CPR political analyst Amy Walter. “Texas’ shift from Lean Republican to Toss Up shouldn’t come as a surprise. Recent polling in the state — both public and private — shows a 2-4 point race. That’s pretty much in line with the hotly contested 2018 Senate race in the state where Sen. Ted Cruz narrowly defeated Rep. Beto O’Rourke 51 percent to 48 percent.”

Another reason there is growing uncertainty about which way Texas will go is the high turnout for early voting. With one more day left to go, almost half of the state’s registered voters have turned out already. There have been predictions that total turnout could top 70% when it’s all said and done Tuesday evening.

Voters are surging to the polls in the state’s big cities and the suburbs, which have diversified in the last four years and are likely to now lean blue. The polling backs this up with numbers that show Biden “running strong in and around metro suburban parts of the state,” Walter notes in her report.

Overall, the RA News surveys showed Trump taking just five of the districts, Biden winning seven and the remainder ranked as toss-ups with neither candidate having the support of at least 50% of those polled.

In a sign of the growing importance of the Texas Hispanic vote, the Biden camp included McAllen in the Rio Grande Valley on running mate Kamala Harris’ itinerary for a get-out-the-vote visit to Texas.

On Tuesday, NBC News shifted Texas from leaning Republican to being a toss-up. Like CPR, the news organization cited recent polling as a reason for the change.

Due to its 30-year history of being solidly in the red column, pollsters and the pundits don’t have much experience dealing with Texas as a battleground state. The switch from leaning red to being a toss-up state is big and signals that after a 30 year drought, the Lone Star State may be poised to have a real say in the outcome of Tuesday’s election.