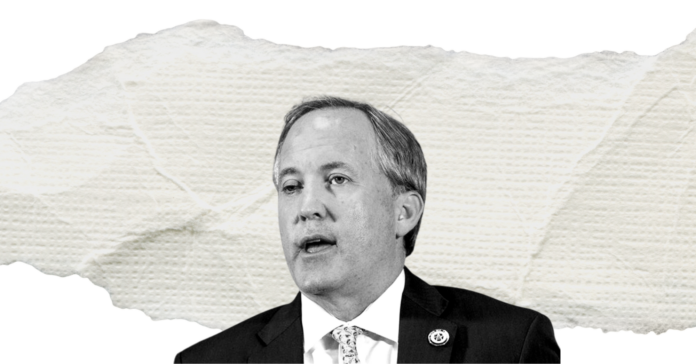 Texas Attorney General Ken Paxton and Catherine Engelbrecht have both gone to great lengths to support former President Donald Trump’s big lie, and have bonded in the process.

According to Reveal, when Engelbrecht, founder of the nonprofit True the Vote, found herself in trouble, Paxton’s office came to the rescue.

“God bless you. God bless you, Ken Paxton, God bless you. And thank you for all that you and your team do,” said Engelbrecht, on her podcast in July 2020, during which she said she considered Paxton to be a close friend.

How did this convenient “friendship” begin?

In 2016, Paxton’s office advocated on Engelbrecht’s behalf before the Texas Supreme Court when she got into legal trouble with her previous nonprofit organization, King Street Patriots, for being overtly political.

Later on, in 2020, the two did everything in their power to support Trump’s lie that the 2020 election was stolen. Paxton filed a federal lawsuit on behalf of Texas seeking to overturn the election in key states where Trump had lost – a suit that the Supreme Court eventually dismissed.  Engelbrecht, meanwhile, accepted $2.5 million from a major conservative donor to lead a legal and PR campaign to contest the election results.

True the Vote quickly dismissed the lawsuits it filed and provided no evidence of voter fraud. Shortly after, the donor, Fred Eshelman sued the charity in rural Austin County, Texas, in February 2021 for misusing his donation.

Anytime a charity in Texas is sued, the state attorney general’s office is notified under law.

According to Reveal, on March 9, 2021, an attorney for True the Vote wrote to Assistant Attorney General Zeenia Challa that he anticipated that she would want to know “that the funds spent by this charitable organization are being spent consistent with the purposes for which the entity was formed.”

Later on, True the Vote argues that the lawsuit did not have standing because it was a matter for the Texas attorney general’s office – the Austin County judge agreed and released Engelbrecht’s nonprofit from having to return the $2.5 million.

“Instead, the only true party in interest relative to money donated to this charitable organization is the State of Texas, as represented by the Attorney General,” True the Vote argued, according to court records.

More than a year has passed since the case was dismissed and Paxton’s office won’t say whether it ever investigated the donor dispute.

Paxton’s office also refused to answer questions about whether it will examine the organization’s finances –Reveal from The Center for Investigative Reporting found that True the Vote had engaged in a series of questionable transactions that sent more than $1 million to Engelbrecht and other insiders while failing to back up its voter fraud claims.

Paxton is currently facing potential disbarment for attempting to overturn the 2020 presidential election results, is under investigation by the FBI, is getting sued by whistleblowers in his office, and awaits trial for a seven-year-old felony indictment for securities fraud.