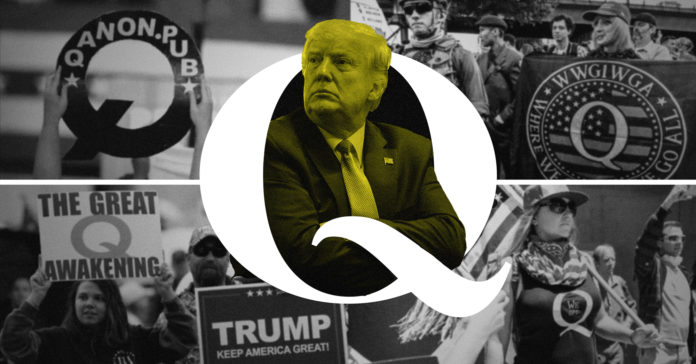 Editor’s Note: This is the second in a two-part series on QAnon and its growing foothold in Texas. Here is part one.

Houston’s famous “Be Someone” sign on the bridge over I-10 and I-45 north of downtown was recently painted over by persons unknown to read #SaveOurChildren. There is perhaps no better example of how the hashtag and accompanying part of the QAnon movement has taken over the discord surrounding the subject of child trafficking.

#SaveOurChildren is part of the QAnon family of conspiracy theories that has recently gained a major foothold in Texas. Unsuspecting people on social media have been duped into sharing content purporting to be nonpartisan cries to fight the sexual trafficking of minors, but the true reason behind #SaveOurChildren is to draw new recruits into the cultish belief that Democrats, Hollywood elites, and wealthy Jews are kidnapping kids for use in Satanic sexual rituals where their body fluids are harvested for life-prolonging elixirs.

It’s tempting to say, “what’s the harm?” The problem is the toxicity of QAnon’s campaign and its overshadowing of legitimate efforts to help end the trafficking of children.

The most famous case is Edgar Maddison Welch, who in 2016 stormed a Washington D.C. pizzeria and opened fire because he thought he would be liberating children held in a sex dungeon operated by Bill and Hillary Clinton. More recently, Cecilia Celeste Fulbright of Waco was arrested after she drunkenly tried to crash into cars she was convinced were being used to abduct children for human trafficking.

“This fight against this belief that the Hollywood elites or whoever the conspiracy theorists are blaming for this big huge pedophile rings, it’s just a distraction from the real issue that’s happening to real children,” said Texas Center for the Missing CEO Beth Alberts. “Our time is being eaten up telling people to check their sources.”

Alberts is an on-the-ground activist fighting for missing children, many of whom disappear into trafficking. Human trafficking is undoubtably a problem in Texas, especially in Harris County where rates have doubled since 2018.

No one is arguing that there isn’t a profound problem of sexually trafficking minors that needs to be addressed urgently. However, the idea that children are being snatched off the streets by agents of Wayfair, John Podesta, or Oprah is a reckless misunderstanding of how trafficking typically occurs. Contrary to a popular QAnon talking point, random people are not generally looking for kids in masks because it will be easier to take them. The mask involved is usually one in the form of a social media avatar.

“More and more children are responding to messages online and being led into trafficking that way, especially since coronavirus when more and more kids are home and online,” Alberts said. “There’s no giant pedophile scheme out there in Hollywood. They aren’t trying to lure kids. That’s not real.”

How it Really Happens

The primary method of procuring trafficked minors is grooming, usually through online communications. People looking for minors pose as other teenagers or young adults through social media or gaming chats. Conversations start innocently enough but quickly progress into sharing pornography or declarations of love. A child won’t think of the person on the other end as a creep; they’ll think of them as a friend or romantic partner.

“A predator on the internet starts talking with the child,” Alberts said. “They want to grow up and get the attention of adults that are not their parents. Kids think it’s safe. They don’t realize when they let their guard down, they can start to be groomed, maybe even by a dedicated group handling the communication in shifts.”

One survivor of this type of approach is Jessica Stone of Clear Lake. She started being groomed by a man who knew her brother over Yahoo! Messenger when she was 15. The man ran a pornography ring and posed as a 19-year-old trying to get Stone to participate in his work. Stone never did willingly trust him to her knowledge, but the grooming practices still led to her trusting a dangerous man far more than she should have. Eventually, she was drugged and lost four days’ worth of memory.  All she recalls is the lights of a camera flash. According to her, the man had relationships with dozens, perhaps hundreds of girls like her.

“He took the pretty classic approach, said he’d make me a star, that he loved me, offered me cars,” Stone said. “I saw that it was grooming, but it didn’t keep me safe. It messed my brain up. There’s no way to avoid the consequences of the grooming even if you’re prepared and try.”

People who are interested in actually fighting the trafficking of minors rather than participating in the cult recruitment program of QAnon have some actual options.

Texas Center for the Missing runs an excellent online resource page that has classes for parents and adults about how to keep your children safe. They’ve also partnered in the Houston Metro Internet Crimes Against Children Task Force conglomerate that hosts an anonymous tip line people can report grooming behavior to so that law enforcement can look into it. Volunteering is also an option.

The fight against human trafficking happens mostly within communities, not as part of a vast web of left-wing hooded figures.

“Work more at the local level,” implores Alberts. “If you want to help, don’t spread unhelpful information. Join a nonprofit that is legitimately working on this. We’ll put your time and attention where it is effective. It’s easy to sit behind a computer screen and shoot this nonsense off, but it just draws attention from where it needs to be.”

Unfortunately, the sinister grip of conspiracy theories thinking is drawing away resources for the people actually trying to fight child trafficking. National tip lines have been flooded with garbage spread by conspiracy theorists. Alberts estimates that a good five percent of her time is being spent correcting wild and outlandish QAnon nonsense and Democratic emails, George Soros and others.

“It adds up,” says Alberts. “Frankly we’re already pretty busy and overwhelmed with real, legitimate cases, and any amount of time taken away is a disservice to the children.”

The proliferation of QAnon’s twisted worldview is also draining on actual survivors. QAnon supporters have an agenda of radical Trumpism, and they are using the real issue of child trafficking as a way to spread it even if it hurts the people #SaveOurChildren claims to want to help like Stone. She’s joined numerous online groups in an attempt to talk with some of the adherents of the conspiracy theory, but the results have been disappointing and triggering.

“I’ll post about how the misinformation hurts me, and I just get called a crazy troll or a liar,” she says. “They claim to speak for the victims, but whenever I speak, I am laughed at and ridiculed. It’s upsetting fan fiction. People mix all these other conspiracy theories like antimask stuff and lizard people. It’s infuriating. There are always a few good ones in there, but in general if you don’t belong to QAnon, you aren’t welcome. That worries me. This is hurting the cause, and I feel powerless to do anything about it. It’s triggering as shit, and I can’t count the number of laugh reactions I get when I talk about it online. I’m dealing with it, but it affects my sleep and my wellbeing.”