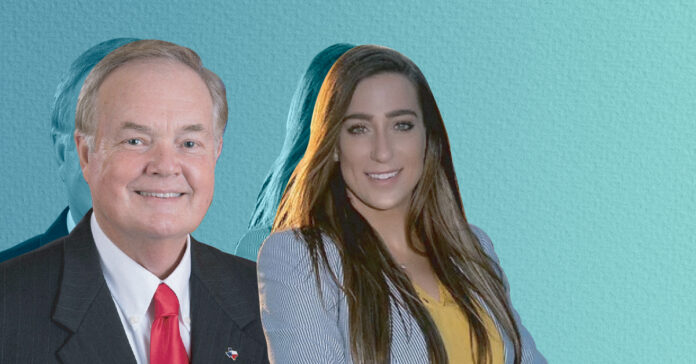 A year after the power grid failure that led to millions of Texans losing power and water and hundreds to die, incumbent Wayne Christian, Chairman of the Railroad Commission, was forced into a runoff with attorney Sarah Stogner. The race is seen as a referendum on how voters’ perceive the performance of the top oil and gas regulator during the 2021 winter storm, and the year since to prevent another disaster.

As of Wednesday, Christian, the Grammy-nominated gospel singer received 47.17 percent of the vote while the runner-up, oil and gas attorney Sarah Stogner, received 15.12 percent. This makes the third statewide GOP primary to go to a runoff, the other being incumbent Ken Paxton against George P. Bush for Attorney General and Dawn Buckingham against Tim Westley for the open seat heading the General Land Office.

The two were in the Republican primary with three other candidates, Marge “Sarge” Summers, who died in a car accident during the campaign but remained on the ballot, engineering consultant Tom Slocum Jr. and oil and gas manager Dawayne Tipton.

During the primary election, Christian fielded criticism after the Odessa American broke the story of a lawsuit involving a Midland oil-waste dump, whose permit he voted for despite agency staff recommending against doing so. The criticism centered around the oil and gas regulator receiving a $100,000 campaign contribution from the company whose permit he approved.

Christian has been accused of not holding the natural gas industry accountable for their part in the blackouts during the 2021 winter storm. He has defended them, touting the industry talking point that the primary cause of natural gas not flowing was their electricity was turned off. This claim has been contradicted by reports from ERCOT and the FERC.

The lack of standardization and delay for the winterization of the natural gas supply is a critique nearly all of Christian’s GOP opponents have made.

To raise attention for her campaign and the race with little resources to spare, Stogner posted a controversial campaign ad where she rode a pump jack semi-nude. Although it led to one editorial board rescinding their endorsement, it might have been what put her over the edge to make the runoff.

It remains to be seen whether the consolidation of the votes for anyone other than Christian go to Stogner or come back to Christian.

The primary runoff to decide who will be the Republican nominee to sit on the three-member panel overseeing oil and gas in Texas will be held on May 24.