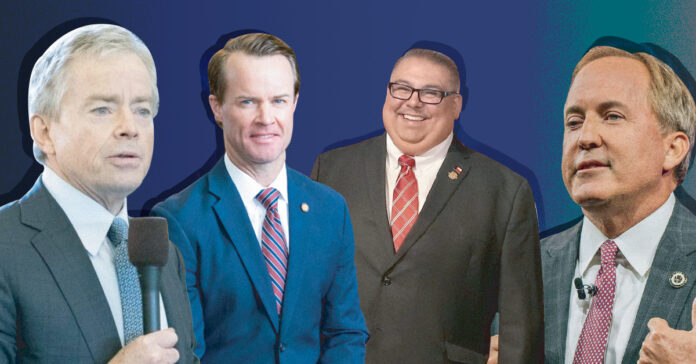 The 2022 Texas Republican Primary came down to infighting among the party. The last stalwarts of the traditional Texas conservative movement sought to hold back the more blatantly fascist wing of newcomers. Despite private donors spending millions to try and oust the relative moderates, the extremists generally failed.

The money, millions of dollars, was being funneled in by the Defend Texas Liberty PAC, a mega-donor alt-right network led by oil and gas billionaires Tim Dunn and Farris Wilks. It was formed from the ashes of Empower Texans and has long been a source of pushes to the right in areas like voter suppression and the marginalization of ethnic and gender-sex minorities. Earlier in the year, the PAC attacked perceived weak members of the Texas Republican Party, mostly those who opposed things like charging those who get abortions with capital crimes. The PAC spent at least $5 million trying to unseat Republicans who didn’t go in for the more extreme measures.

In all but three cases, their attempts crashed and burned ignobly. Texas House Speaker Dade Phelan, who ran unopposed but was challenged by proxy when many of his closest allies found primary opponents backed by Defend Texas Liberty, crowed about the victory.

“Voters across Texas delivered a resounding message Tuesday that the GOP represents their values up and down the ballot,” Phelan said in a statement. “Hard work has paid off, despite the efforts of some out-of-touch groups that have spent millions in election after election — and still don’t have much to show for it.”

Targeted Republicans who easily sailed to victory include Rep. Ryan Guillen (R-Rio Grande City), who was mostly under fire for formerly being a Democrat, and Rep. Reggie Smith (R-Sherman), a moderate who went up against the Dallas salon owner who was jailed for refusing COVID restrictions. Both won their primaries outright, along with 14 of the PAC’s other targets in the Texas House. Three members who have PAC-funded challengers will go to runoffs.

By far, the biggest failure of the night came in the governor’s race. The possibility of far-right challengers is widely seen as the reason Governor Greg Abbott pushed through so many draconian socially regressive bills this year, including a near-total abortion ban and restrictions on trans children. The preferred candidate of the PAC was former State Sen. Don Huffines. Huffines regularly made headlines for his outright bigotry and desire to drag the state into extremism, everything from wanting to ban Chinese students from Texas Universities to having avowed white nationalists on his staff. Abbott easily made the 50 percent threshold to stave off Huffines.

Ironically, the only Texas Republican in high office to have a bad night was Attorney General Ken Paxton. Already under both indictment for fraud and federal investigation for abuses of his office, he found challengers coming at him from more moderate positions. He will end up in a runoff with Land Commissioner George P. Bush, the former presidents’ nephew and great nephew who promised to clean up the corruption currently dominating the office under Paxton’s rule.

Though it may seem like extremism lost in the Republican Primary, there is another possibility. Republican voters might not have been against further movements to the right so much as satisfied by the extremism that was already present in the incumbents. Aside from Paxton, who is caught up in multiple legal scandals, the Republicans that the PAC tried to oust were still consistent votes for some of the most extreme right wing measures in state history.