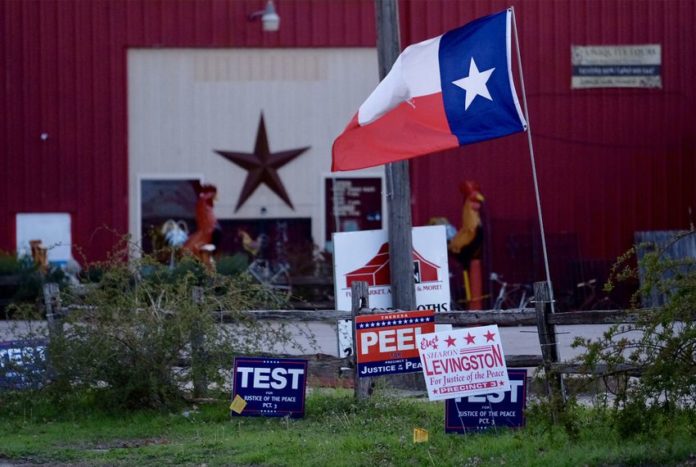 The list of missteps in the Texas secretary of state’s review of the voter rolls for supposed noncitizens grew again Monday, when the office inadvertently added additional people to its already flawed list of voters flagged for citizenship checks.
Blaming a vendor for the error, a spokesman for the secretary of state’s office confirmed new names were sent to certain counties for possible investigation. The mistake occurred while state election officials were analyzing new data from the Texas Department of Public Safety.
Like with the state’s initial review of previous years’ data, the secretary of state obtained a list of individuals who had visited DPS offices during January and February and indicated they were not U.S. citizens. The goal was to match those names with individuals on the state’s voter rolls and eventually send that list of names to counties for possible investigations.
But the secretary of state’s office was not ready to send out those lists when some counties received them Monday.
“The test data that some counties had mistakenly received earlier today was the result of an issue with our vendor, which we immediately addressed with our vendor and the counties,” Taylor said.
That slip-up was the latest in the six weeks of blunders since the secretary of state’s office sent lists of almost 100,000 supposed noncitizens to local voter registrars and the attorney general’s office. Since then, state officials have acknowledged about 12,800 of those individuals shouldn’t have been on the list because they had actually proved their citizenship when they registered to vote at state offices. More than 12,000 others were erroneously included because of a miscommunication between state agencies.
Coupled with the likelihood that naturalized citizens would be swept up in the review, those errors have threatened the tenure of Secretary of State David Whitley, who faces an uncertain path to confirmation in the Texas Senate after being appointed to the post in December by Republican Gov. Greg Abbott.
The state’s errors were partly behind a federal judge’s decision to temporarily block any counties from purging voters as part of the review. And amid the debacle, the secretary of state’s office indicated it was holding off on its plans to send counties monthly lists of more voters whose citizenship they should consider reviewing.
The original plan was to send counties more updated lists on a monthly basis with the intention of accounting for people who may have become naturalized citizens more recently. But state officials admitted they needed to refine their data before they moved forward.
It’s unclear how many Texans were flagged on Monday or how many counties received the additional data.
Two counties confirmed to The Texas Tribune they had received the test data set, which appeared to be riddled with the same errors in the state’s original list. Travis County received 146 names on Monday, but a “substantial number” had proved their citizenship when they registered to vote at DPS, said Bruce Elfant, who oversees the voter rolls in Travis County.
Travis County officials did not finish reviewing the Monday list because they got a call from the secretary of state’s office indicating it was sent by mistake.
“They said they sent the list in error and that we should disregard it,” Elfant said.
Williamson County also received a list on Monday, only to be later told “it was a mistake that shouldn’t have gone out,” said Chris Davis, the county’s election administrator.
The secretary of state’s mistake comes the same day attorneys with the attorney general’s office indicated in federal court that the secretary of state’s office was still working on the process for sending out the monthly lists.
Naturalized citizens and civil rights groups are suing the state over claims the review is unconstitutional. And their lawyers had raised concerns that the flaws in the original list would transfer over to the monthly lists. In blocking the removal of any voters from the rolls in February, federal District Judge Fred Biery ruled the state could proceed with its monthly rollouts but ordered the secretary of state to advise local election officials not to ask any voters for proof of citizenship or remove any of them without approval from the court.
The state’s review process has a caused a breakdown in the relationship between the secretary of state and counties, causing local officials to question the credibility of the state’s data. The secretary of state’s most recent mistake likely won’t help repair that damage, Elfant said.
“The trust isn’t there,” said Elfant. “And if we got another list today [with errors] after everything we’ve been through, it’s going to take a while to build this trust again.”
This story originally appeared on the Texas Tribune. To read this article in its original format, click here.