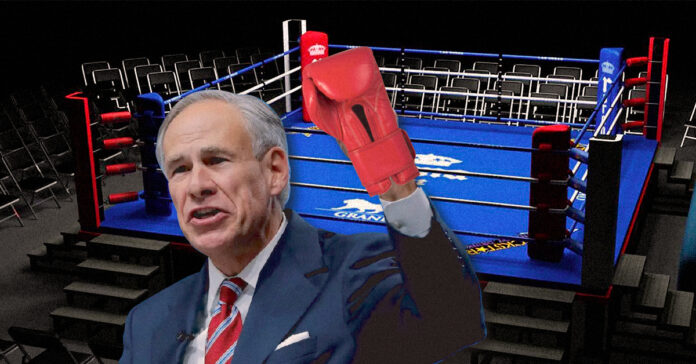 At an evangelical mega-church in the Woodlands on January 10, roughly 600 conservatives gathered to vent their frustrations over Governor Greg Abbott at a gubernatorial round table.

“Our goal is to force a runoff, which will probably be between Abbott and one of these gentlemen on the stage,” said Fran Rhodes, president of the True Texas Project, a conservative activist group founded 12 years ago as the Tarrant County Tea Party. “There are eight people running, so that’s seven opportunities to vote for not-Abbott.”

For the first time in his political career, Abbott is in for a fight. Since he was elected to the Texas Supreme Court in 1996 by a margin of 68 points, he has yet to face a serious primary challenge for elected office. Now, with a bevy of hyper-conservative challengers, Abbot is scrambling to cover his right flank.

Ensconced in red and blue light, former State Senator Don Huffines, former State GOP Chairman Allen West, and conservative talk show host Chad Prather each tried to one-up each other’s conservative bona fides. An empty chair with Abbott’s name served as a metaphor for those who allege the governor is inaccessible to his constituents. The crowd, entirely maskless, was packed tightly into the main sanctuary, omicron be damned.

True Texas Project CEO Julie McCarty kicked off the evening’s round of questions. While crediting Senate Bill 8—the Texas law that bans the procedure after six weeks, before most women even know they are pregnant—for making “progress” on the issue, McCarty lamented that abortion is still legal in the Lone Star State: “Tell us if you support abolishing abortion with no exceptions, and if not, what exceptions do you make and why?”

“I’d like to think I’m the most pro-life candidate ever to run for governor,” Huffines said. “I’m pro-life from conception to natural death—no exceptions.”

Prather echoed Huffines’ remarks, noting that while he was born in Georgia, he considers himself a Texan because he was conceived in Dallas. “That’s how pro-life I am,” he said.

Only West seemed to stake out anything but the most extremist position. “If my daughters were to be criminally violated, I would love to be able to have that discussion with God and with them,” he said. “But I would do what the people have me to do.”

The candidates’ remarks belie the fact that Abbott has been more successful than any modern Texas governor at limiting abortion access in his state. After he signed SB 8 in September—which bans abortion after six weeks and deputizes private citizens to enforce it—the number of abortions statewide fell by 50 percent in the first month, according to data from the University of Texas. In the months since, neighboring states such as Oklahoma, New Mexico, and Colorado have reported huge influxes of patients seeking abortions.

What’s more, Abbott has already set the stage for abortion to be banned outright, bringing him in line with the other candidates. In June 2021, he signed what’s known as a “trigger law” that would ban abortion, with no exceptions, in the event that Roe. v. Wade is overturned.

The event drew a group of voters that have come to define the GOP base since the election of former President Donald Trump. Highly engaged, they brook no compromise. “One of the very good things that Donald Trump did for America was that he taught Republicans how to fight,” Rhodes said.

The moderator then asked about rising property taxes—a favorite topic of discussion among the party’s right wing, which often advocates for abolishing taxes altogether.

“Property tax is not only wrong,” Prather said. “It is the most immoral form of taxation that anyone can imagine. If you read the Old Testament, God wouldn’t tax his own people.”

Prather was making an obscure biblical reference to Ezekiel, in which the prophet gives ancient Israelites instructions on how to build the Temple of the Lord. To say that Prather was cherry-picking his verses is generous, not to mention that he is relying on outdated laws from antiquity. The same chapter also includes instructions on when to offer a young bull or six rams and how many ephahs of grain to include in one’s burnt offerings on a new moon. Naturally, there was no mention of Jesus blessing the poor, the meek, the persecuted, and feeding the starving masses. Never mind that when Jesus spoke of taxes, he urged his followers to “give to Caesar what is Caesar’s.”

He proposed switching to a zero-based budget system, in which the legislature must approve every single line item every other year. In effect, this would mean each state-funded organization—public schools, the state police, the state Department of Education—would have to fight for its very existence every other year.

A few minutes later, the conversation turned to the issue of “annulment”—the idea that states can nullify federal laws they deem unconstitutional. This is a relatively unknown issue in the mainstream, but is a popular litmus test among hardcore conservatives. “How would you use annulment to deal with the federal government’s overreach?” McCarty asked.

“You think nine Supreme Court Justices are going to come down to Texas and keep me from putting prayer back in the schools?” Huffines declared with a grin, winning raucous applause from the audience. “This is Texas. We’re not going to ask permission for anything.”

It’s hard to see how there is room to the right of Abbott on this issue. When he was attorney general, Abbott famously said, “I go into the office in the morning, I sue Barack Obama, and then I go home.” Most recently, Abbott and his administration have repeatedly sued the Biden administration over everything from border enforcement to vaccination and mask mandates in schools. Perhaps Abbott’s weakness here is that he bothers to adhere to federal laws at all.

But perhaps the most telling round of questions came during the “lightning round” at the end. Each of the three candidates was given a laminated sign with a green thumbs-up on one side and a red thumbs-down on the other. They were then asked a series of 12 questions in rapid succession. All three candidates gave the same answers.

“Will you ban the social transition of minors such as name and identity changes at school?” Thumbs up.

“Are you willing to have state law enforcement arrest federal agents for violating the Constitution?” Thumbs up.

“Would you remove a legislative representative from office for fleeing the state during the legislative session?” Thumbs up.

At the conclusion, McCarty admitted that the questions were not intended to demonstrate differences between the candidates, but instead to have video evidence of each candidate’s position.

After the lightning round, the True Texas Project projected a QR code on the screen and asked attendees to vote in a straw poll. The results were released the next day. West—the candidate with the most name recognition—garnered the most support, with 39 percent of attendees saying they would vote for him. Huffines and Prather followed with 36 and 24 percent, respectively. For this crowd of fanatics, Abbott came in last with a mere 1 percent.