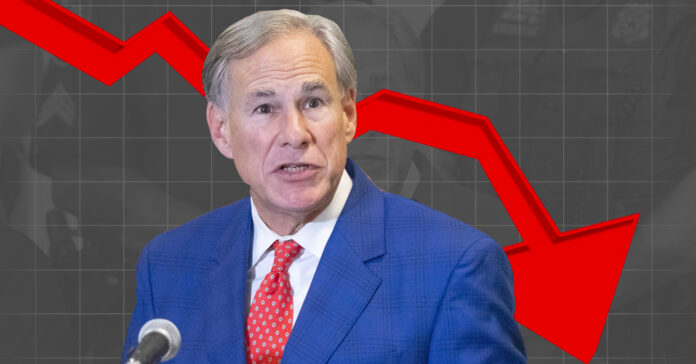 In a recently released poll by Quinnipiac University, results show the steady downward trend in terms of approval that Governor Abbott has been experiencing among Texan voters.

According to the poll, 51 percent of Texan voters do not believe Abbott deserves to be reelected, in contrast with a 42 percent minority who believe he should be governor for a third term.

As reported by The Hill, the opposition to Abbott’s reelection was up from June, when a separate Quinnipiac poll found that 46 percent of Texas voters supported Abbott’s 2022 reelection bid, compared with 48 percent who did not.

Those numbers, according to Quinnipiac, mark the first time since the firm started polling on the Lone Star State that Abbott’s approval rating has sunk below his disapproval rating, referred to as being “underwater.”

Voters were also asked about Abbott’s handling of four separate issues, receiving only one positive score out of the four: handling of the economy, with 53 percent of approval and 39 percent disapproval.

“Despite high marks for his handling of the economy, emotional lightening rod issues like policing the border, containing COVID-19, and legislating the right to choose in Texas are not helping Governor Abbott’s standing with the voters” said Quinnipiac University Polling Analyst Tim Malloy.

In addition to a majority of respondents believing there was no widespread fraud in the 2020 presidential election, voters were also asked if they thought Greg Abbott would make a good president, with two-thirds (67 percent) saying no, while only 24 percent said yes.

Crenshaw Defends Himself After Snapping At Young Girl: ‘Don’t Question My...