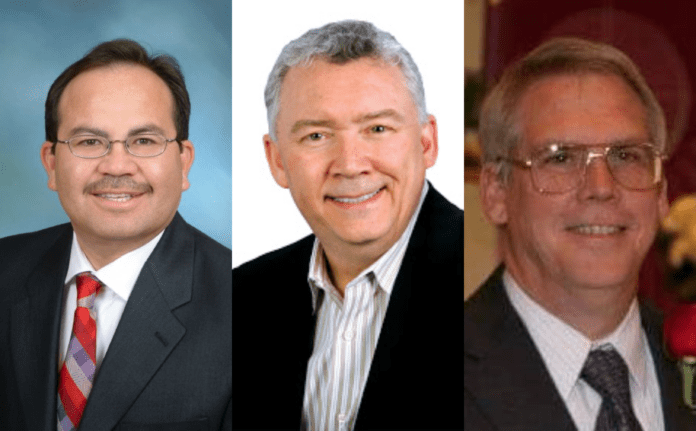 (From left to right: Art Fierro, Dr. Michiel Noe, Hans Sassenfeld)
Three candidates have filed to run for the January 29 special election for State House District 79, which was called by Governor Greg Abbott to fill the vacancy created when State Representative Joe Pickett (D – El Paso) announced he is stepping down on January 4 due to ongoing health problems.
To run, a candidate must be at least 21 years of age, a Texas resident of 2 years, and have been a resident of the House District for the 12 months prior to the election. The candidate’s application must also be accompanied by a filing fee of $750.
Reform Austin has previously reported on two candidates who have filed to succeed Pickett: Art Fierro, Chairman of the El Paso Community College Board of Trustees, and Dr. Michiel Noe, an outgoing El Paso City Council member.
On Thursday, January 3rd, one additional candidate filed, Republican Hans Sassenfeld, an activist and Secretary of the El Paso County Republican Party.
To win the special election outright, a candidate must receive at least 50% of the total votes, or there will be a runoff election between top two vote-getters, several weeks after the first round.
Early voting will begin on Monday, January 14, 2019. Election Day is January 29.