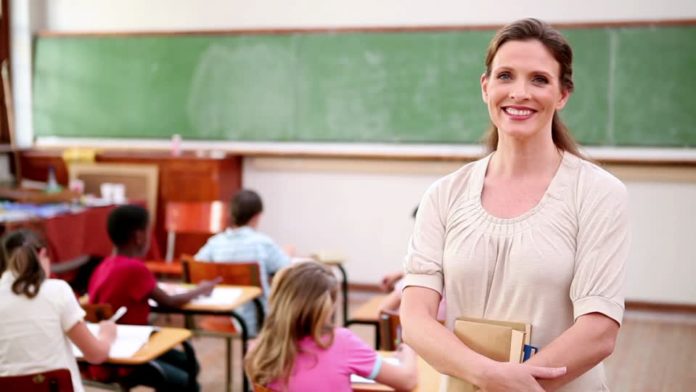 Teaching is one of the most valuable yet undervalued professions in the United States. Teachers educate and mold our next generation of thinkers, workers, and leaders.  Nowhere is this more important than in Texas, where we have one of the fastest growing school-age populations in the United States, and where the emerging economy needs high-skilled workers.
However, instead of supporting Texas teachers and their vitally important job, state officials have been removing resources from classrooms and shortchanging educators’ pay. Indeed, many teachers today are forced to work multiple jobs, just to earn a living.
According to the National Education Association (NEA), Texas ranked No. 1 in the number of operating public schools, No. 1 in the number of teachers, and No. 2 in student enrollment from 2016-2017. Time: Money reported the 2016 nationwide average salary for teachers to be $58,353. Texas, however, lagged the average for teacher salaries, ranking 28th in teacher pay with an average salary of $51,890.
These lackluster teacher salaries in Texas fit a long-term pattern. According to the National Center for Education Statistics, in 2004-2005 the nationwide average was $47,516 with Texas again ranking just 28th, at $41,011. Four years later, in 2008-2009, rather than improving, the Lone Star State’s ranking had fallen to 33rd with an average salary for teachers at $47,157, well below the nationwide average of $54,319.

Nationwide, the cost of living in continues to rise, but teacher salaries have simply not kept up, even when adjusting for inflation, as reported by Time: Money. And Texas is no exception.
The low pay, rising insurance premiums, and comparatively low pension benefits does not make teaching an attractive career, despite being a critically important job for the state’s future economic progress. The Texas Education Agency (TEA) also reported a nearly 6,000 (1.48 percent) person difference between teachers who left and were hired for the 2016-17 school year. This trend has remained consistent with the size of the workforce decreasing due to attrition.
A teacher in suburban Austin, who wishes to remain anonymous out of concern for her position, worries about the future of teaching if pay does not increase. She believes many will either change professions or move out of state if teacher pay continues to lag national trends.

“With class sizes going up, funding going down, the only thing that happens is that classroom teachers get overworked and as my class sizes go up and the number of classes I teach goes up and the expectations and interventions and things like that go up. Salaries don’t and the price of our benefits and insurance goes up. It’s just to a point where a lot of folks my age who – because I’m early 50s. I started teaching early. And I can teach ‘till I’m healthy enough. I can teach until I’m 65. But my honest concern is that if I have to keep working this much, I won’t be healthy by 65. I just won’t. I’d love to do this longer, but it doesn’t make sense financially and it doesn’t make sense physically.”

The compensation challenges teachers face aren’t limited to their salaries, but also extend to benefits. Health insurance premiums continue to rise for teachers, while the state’s monthly contributions remain at $75 and the district’s required contribution is at $150. Although districts can increase their contribution, worsening budget constraints make it difficult when funds are already being stretched for books, desks, computers and other needed items.
The below-average salaries being and rising health premiums, it’s an even larger burden for teachers with families who face even higher healthcare premiums and costs. A small percentage of the cost is covered by the state and district, leaving teachers to pay for over 80% of the cost. With little action by the federal government on healthcare, teachers are in the crosshairs.
The previously mentioned Austin area teacher lamented the current situation compared to when she started teaching 28 years ago. She’s seen class sizes increase, while funding has not kept pace. Along with three other jobs, giving her students time, focus, and energy has become increasingly harder and is pushing her towards retirement within the next couple years.

“When I do retire, while I will in the next couple of years because of the economics of it, part of the reason that I’ll still work is to still have insurance because I’m not 65. And retiree insurance is not going to be adequate. It’s overpriced and doesn’t cover a lot of stuff.”

An increase in teacher salaries was on the table in the Texas Legislature’s 85th Special Session agenda in the summer of 2017 with SB 19 – advocating for teacher raises of $1,000. But lawmakers ultimately let the bill die without taking action.
For the upcoming 86th session, some Texas legislators are again showing interest in addressing low teacher salaries and overall education funding by pre-filing bills pushing for funding increases. Legislation filed so far includes:

These bills may not be a permanent fix, but they are a start.
The Austin area teacher believes Texas has continued underfunding education and wants the legislature to try something they haven’t done before: “throw money at the problem.” The benefits from properly funding education are better for the teacher, students, state, and the future.

“You know, nobody gets into this job to make a lot of money, but to be able to make a reasonable wage to be paid like a professional would be a nice payoff. And it wouldn’t be just a payoff for teachers, but for students. It would be good for the entire state. Better educated students come from compensated teachers who can teach and don’t have to have two or three jobs. If the state of Texas would just fully fund the education system and we would all be better off with an investment for the future. We just gotta do it.”

Praise and kind words for educators aren’t enough. Actions speak louder than words, and teachers and taxpayers know the difference.  Elected officials must act and begin providing increased resources for one of the toughest and most needed jobs in America. With Texas teachers leaving the profession in droves and the state’s public school finance system on an unsustainable course, another legislative session without meaningful action would be disastrous for our future.
Will Texas legislators finally show teachers the respect they deserve, or will the status quo remain? Teachers and taxpayers need to demand greater investment by the state government in our teacher and in our kids’ futures.  Reform Austin will be watching to see what they do.
Reform Austin has created a chart displaying the average teacher salary for each state, including the District of Columbia, for your convenience.