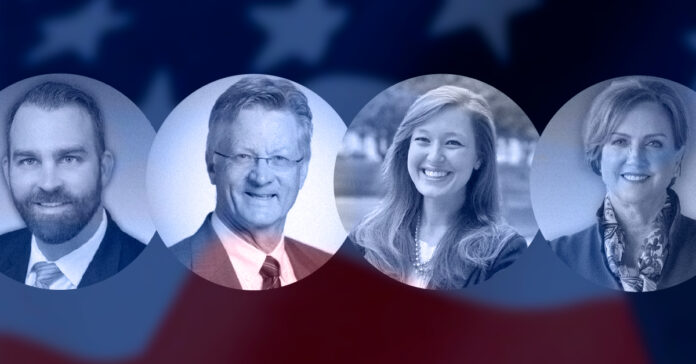 With the primaries a fading memory for all but the handful of politicians in the run-off, Governor Greg Abbott has made a slew of political endorsements this past week. Who he backs might give us a better idea of whether Abbott is looking for a further right shift or a more moderate approach should he remain in office after November.

In the runoff fight for District 23 (Galveston), Abbott has thrown in his lot behind trial lawyer Patrick Gurski since the incumbent, Mayes Middleton, is running for the Texas Senate. It’s difficult to see why exactly Abbott prefers Gurski over his run-off opponent Terri Leo-Wilson. Both are staunch far-right conservatives who have made their names by fighting progressivism in schools and preventing immigration. That said, Leo-Wilson, who served on the State Board of Education for ten years, is generally seen as being the more ideologically extreme candidate, or at least the one with the most extremists in her corner. The difference between them, though, is razor-thin.

Freshman Texas Representative Glenn Rogers had one of the narrowest races in the 2022 primaries, just barely falling under the 50 percent threshold to avoid a runoff. Nonetheless, he has Abbott’s backing against his challenger, retired biochemist Mike Olcott. Again, both men are staunch conservatives with generally far-right views, but Olcott appears to be much more obsessed with the idea that the 2020 Presidential Election was somehow stolen from Donald Trump despite there being no evidence of that being true. He also wants to make voter fraud a felony. On the other hand, Rogers was an enthusiastic vote for Abbott’s draconian voter rights and access restrictions bill, which was sold on that same lie.

District 52 near Austin is one of the newly drawn districts that Texas Republicans hope to pick up. Popular Democratic incumbent James Talarico was kind of drawn out of his home district when they made his district more republican so he is now running for re-election in District 50 instead. It’s not hard at all to see why Abbott has backed Caroline Harris. She was the policy adviser for State Sen. Bryan Hughes (R-Mineola), who has been one of the prime architects of many of Abbott’s signature bills in the last session including the rollback of reproductive rights. Harris is an Austin insider who has been the right hand of one of Abbott’s most favored allies for years. Political positions aside, it’s clear he wants her as an ally of the newly drawn district can flip to Republican.

With incumbent Matt Krause focusing on running for Tarrant County District Attorney, District 93 is wide open. Abbott has thrown his weight behind former Southlake Mayor Laura Hill. Though Hill is a far cry from a moderate, her opponent, Nate Schatzline, is frankly kind of nuts. Hill may have actively tried to shut down teaching about the affect of white supremacy in Texas schools; Schatzline appears to not believe structural racism exists at all. A preacher rather than a politician, it’s possible that Schatzline might just be a little too out there for Abbott, especially when Hill at least comes with political experience.

From the endorsements, it appears that Abbott is still trying to hold onto a veneer of respectability by backing candidates who only appear moderate in comparison to slightly more extreme challengers. Though his chosen few seem to not want to push the agenda too much further to the right, they are all staunch allies of the dramatic shift toward fascism Abbott has shepherded over the last year. It does not look like he will begin ruling with more compassion any time soon should he withstand the challenge from Beto O’Rourke in November.