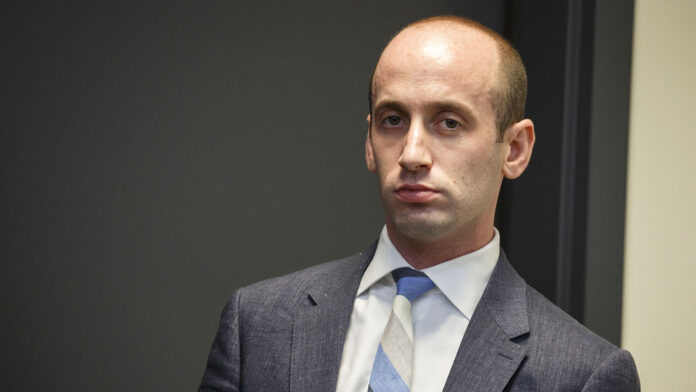 A high profile former official in the Trump Administration known for being a white nationalist launched a racist flyer campaign in Texas with just days until the midterm elections.

Stephen Miller served as a former President Donald Trump’s top immigration adviser and created the cruel child separation border policy. He is also connected to numerous blatantly white nationalist groups, including using the magazine American Renaissance as a source in emails to the White House detailing his plans for the border. A dump of emails from Miller’s time at Breitbart also revealed overt white nationalist positions.

His latest endeavor is the America First Legal Foundation, which he started in 2021. They are the group funding the recent flyer campaign in Dallas. The leaflets scream, “Joe Biden and left wing officials are engaged in widespread racial discrimination against white and Asian Americans” and claiming that Biden has mandated “racial equity.” The advertisements push the unfounded theory that white men are facing widespread workplace discrimination in America. The flyer cites far right news outlets’ interpretation of Biden’s equity orders as proof that whites will be excluded from federal aid in various instances. There has been no evidence this has been or is planned to be the case.

The ad campaign is reminiscent of several white nationalist vandalism cases in the state, particularly the defacement of the Rothko Chapel in Houston in 2018. Flyers saying “it’s okay to be white,” a phrase popular with neo-Nazis, were distributed around the grounds after white paint was thrown on the sculpture dedicated to Martin Luther King Jr.

Again, there is no evidence white people are being denied aid. Vice President Kamala Harris has stated climate change and disaster relief should take into account how communities of color are often forgotten and treated as lesser for needed funds and resources. Her comments have been widely and purposefully misconstrued.

In addition, Miller’s group has been suing the Sate of New York over COVID guidelines. Specifically, they say including the fact that non-whites are at higher risk for death from COVID is racial discrimination. It’s clear that the America First Legal Foundation has dedicated itself to mimicking the language of racial civil rights while doing everything in their power to hamstring the pursuit of them. The goal seems to be to show that whites are facing increased oppression compared to other races in America, a sentiment that is sadly growing more popular despite all evidence to the contrary.