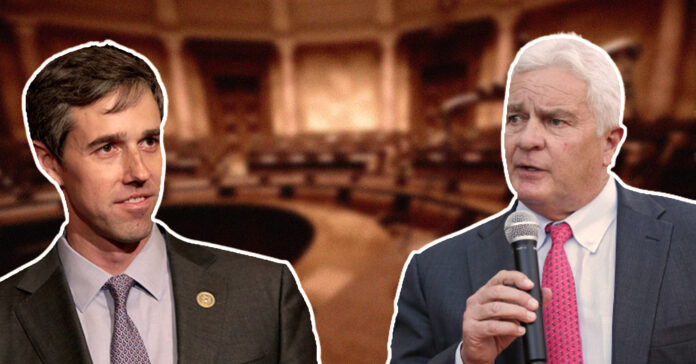 Kelcy Warren, chairman of the board at the gas pipeline company Energy Transfer Partners and one of Gov. Greg Abbott’s biggest donors, sued Beto O’Rourke for defamation, slander, and libel for criticizing his company’s actions.

The lawsuit was filed in San Saba County and seeks more than $1 million in damages, alleging that O’Rourke is trying to “publicly humiliate Warren and discourage others from contributing to Gov. Abbott’s campaign.”

According to The Houston Chronicle, on Monday, O’Rourke responded to the allegations in a press conference, calling the lawsuit  “frivolous” and aimed at trying to stop him from telling the truth about what happened before and after the deadly storm on Abbott’s watch.

“He is trying to stop me from fighting for the people of Texas,” O’Rourke said. “And just as we did before, we are not backing down right now.”

For months, O’Rourke has been raining down on Abbott for accepting a $1 million contribution from Warren after the Texas power grid failure during last year’s winter storm.

O’Rourke has said energy companies have essentially paid Abbott off for not holding them accountable, claiming he is just “connecting the dots” for people so they can see how Abbott has received generous donations from companies that profited off the disaster – Energy Transfer Partners made an additional $2.4 billion when the state’s grid manager pushed power prices sky-high to end rolling blackouts.

The court filing blames O’Rourke for damaging “Warren’s reputation and exposing him to public hatred, animus, contempt or ridicule, or financial injury.”

On Monday, O’Rourke seemed unfazed by the lawsuit as he continued to accuse Warren of “illegal windfall profits off the suffering, misery, and deaths of our fellow Texans.”

Mr. Warren has become one of Abbott’s biggest donors. Since 2019, he’s given Abbott nearly $1.3 million for his re-election. He is one of Abbott’s top four donors since 2019, according to state campaign finance records.

Warren filed the suit as a private citizen and Abbott’s campaign claims they have no affiliation with the court filing.