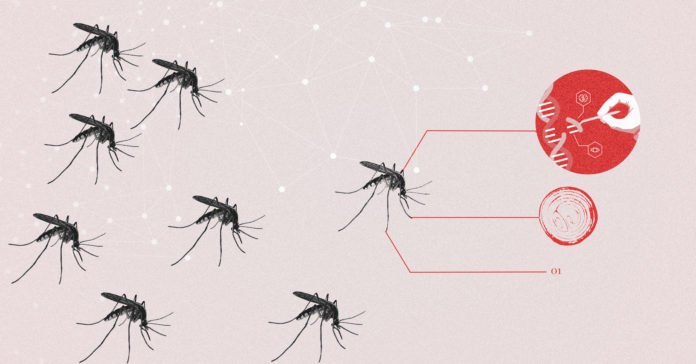 Unfortunately, the coronavirus isn’t the only peril floating around in the environment.

Four years ago, the Zika virus became an issue. More than 300 people were infected in Texas. Zika can cause birth defects and fetal neurodevelopmental abnormalities in pregnant women.

Talks about releasing genetically modified mosquitoes in Houston began in 2018 between Harris County and Oxitec, a United Kingdom-based company that produces sustainable technologies or transgenic methodologies to stem the impact of disease-spreading insects. Talk also began about a similar action in Monroe County, Fla.

However, ecological concerns have been raised about the use of these mosquitoes.

“We had stakeholders there who wanted to use it,” said Kevin Gorman, head of field operations at Oxitec. “We had vector control authorities who were keen to try the technology.”

The Environmental Protection Agency stated in a May 2020 press release that it approved an experimental use permit to Oxitec to field-test its genetically engineered mosquito in the United States.

The genetically modified Aedes aegypti mosquitoes are males that mate with wild female Aedes aegypti, essentially causing the offspring to die before they can reproduce due to a genetic variation.

The latest generation reduced the population of Aedes aegypti by 96% in the first year and more than 90% in the second. These release trials were conducted in dense, urban environments, according to Gorman.

The second generation is the one that has been authorized for an experimental use permit in the U.S. In 2018, the company pivoted to the second-generation mosquito and identified the Florida Keys and Houston as release sites or locations that basically have a year-round presence of the Aedes aegypti.

The Culex quinquefasciatus mosquito species, a vector for West Nile virus, is much more prevalent than the Aedes aegypti in Texas urban centers such as Harris County and the Dallas-Fort Worth metroplex, said Patricia Pietrantonio, a professor in the department of entomology at Texas A&M University.

“There are Aedes aegypti mosquitoes in Harris County also, but their numbers are significantly lower than Cx. Quinquefasciatus,” she said via email. “Aedes aegypti is more abundant in the Rio Grande Valley.”

Though trials in Brazil have proved highly successful, there have been questions about transparency and ecological integrity.

Specific locations selected for release trials were never disclosed, said Iris Gonzalez, coalition director of the Coalition for Environment, Equity, and Resilience, a Houston-based environmental advocacy group. She said this was concerning because “there is a disproportionate rate of higher density in lower-income communities in Houston and predominantly communities of color in Houston.”

She admitted that they’re still in the process of fully understanding the issue and what it means but believes public input is necessary.

“I think that kind of having community, especially those communities that would be most impacted by a release, be at the table — at the decision-making table — to kind of talk through and to maybe see the set of data or the set of information that’s in front of the mosquito board and just be a part of that conversation,” she said.

As far as ecological concerns, there don’t seem to be many. The ecosystem appears to be safe from the introduction of these transgenic strangers.

“Certainly similar releases conducted in other parts of the world have demonstrated a reduction in Ae. aegypti numbers so there is substantial reason to be optimistic,” Zach Adelman, a professor in the department of entomology at Texas A&M University, told Reform Austin via email. “At the same time, these other trials did not reveal any adverse effects on the environment, so evidence suggests there are not any direct ecological concerns.”

Gorman said the company’s mosquitoes eventually dilute out of the population without leaving a footprint.

“You wouldn’t know that Oxitec mosquitoes have been released there because there’s no persistence of the transgene,” he said. “As an ecological tool, it’s super clean as a result. It’s very targeted.”

The transgenic mosquito’s place in the U.S. ecosystem could be viewed as artificial. Gorman noted that the Aedes aegypti is an invasive species not native to the U.S. and removing it would help restore a natural balance.

“In an urban environment, there isn’t a huge amount of competition there for an Aedes aegypti,” he said. “There’s not many things that feed in large numbers on it. It’s less than 10% of the diet of almost everything.”

A release in Florida seems imminent, but not in Texas. Despite an established relationship and much communication, it looks like the Florida Keys will be going solo.

“Although we really enjoyed a sort of really great relationship with Houston at the moment we’re in a holding pattern with Houston,” Gorman said. “And we’re unlikely to be releasing there, and there certainly aren’t firm plans to do so in the next year.”

He cited uncertainty due to personnel changes in the county government as the reason for the decision.

A statement sent to Reform Austin by Sam Bissett, a communications specialist with Harris County Public Health, said the choice to not move forward with the release was made last year by both parties.

“We’d love to start conversations up again … should Texas or others want to but we’re not actively pursuing releases in Houston at the moment.”