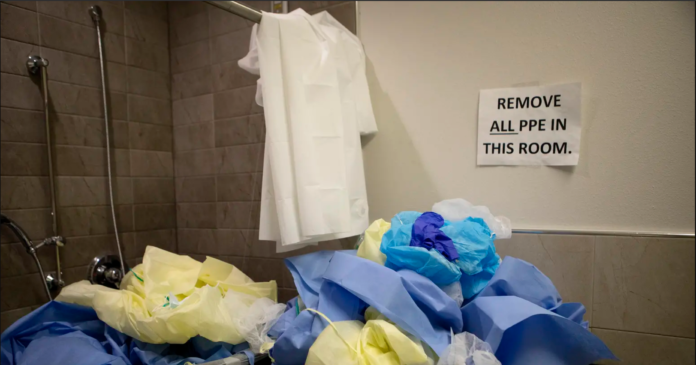 In the spring, as public health officials were beginning to see the novel coronavirus spreading in Texas, Danny Updike had bad news and good news for health care workers in the San Angelo region where he works in emergency response.

The bad news was that the pandemic had brought a sudden shortage of masks, gowns, gloves and sanitizer as demand soared and imports from China ground to a halt. Prices on the private market were skyrocketing, and most of what remained in the shipping container that housed the region’s modest cache of personal protective equipment had expired after years of budget cuts prevented new purchases. Rubber parts were disintegrated, elastic bands rotted.

The good news: Some of the decade-old personal protective equipment was salvageable, and it had not yet been thrown away — another result of budget cuts.

“There really wasn’t a lot of money to pay to dispose of all that, so they had never done it, which turned out to be good,” said Updike, a former coordinator for the Hospital Preparedness Program in the region. “Most of the PPE in the Concho Valley, the first two months or month or so, they used mainly out of that.”

For more than a decade before the coronavirus pandemic, public health funding in Texas failed to keep up with the state’s growth and at times has seen hefty cuts. That was especially true in the federally funded Hospital Preparedness Program, which pays for stockpiles of protective equipment, medical machinery including ventilators and training to improve emergency response — the very things that were most needed as the pandemic began.

In the years leading up to the pandemic, congressional cuts reduced the program’s funding in Texas by more than 40%, from $26 million in the 2013 fiscal year to $15 million in 2019. The program contributes nearly one quarter of the Texas Department of State Health Services’ budgeted amount for preparing for and responding to public health disasters, a category that includes everything from a pandemic to a bioterrorism attack.

Texas also relies on the federal government for a third of its public health agency’s budget. Because the Texas Legislature invests fewer state funds into public health programs than most other states do, those federal spending reductions leave Texas more vulnerable than other populous states.

Texas spent about $17 per person on public health funding in 2019, ranking 40th among states and Washington, D.C., according to the State Health Access Data Assistance Center at the University of Minnesota. California and New York spent more than four times as much per capita on public health.

Meanwhile, federal funding cuts have reduced the number of staffers working in hospital preparedness in Texas, reduced training opportunities, and “resulted in the state having an aging fleet of equipment with limited funding available to repair the equipment or purchase new,” said Lara Anton, a spokesperson for the Texas Department of State Health Services.

And a federal funding change this year in the Public Health Emergency Preparedness program — which funds preparedness training and staff at state and local health departments, rather than hospitals — cut Texas’ funding from the program by 5%, hitting Texas harder than any other state, Anton said. And that’s after the same program took a 30% funding cut in 2007.

Infectious disease experts and emergency response officials say the low level of public health investment in Texas has hampered its pandemic response. That was apparent in the spring when hospital equipment was at its scarcest, but experts say the underfunding of the state’s public health system has led to persistent problems.

Local health departments have seen their workforce shrink over the past decade, with the average number of full-time employees falling by about 16% since 2008, according to the National Association of County and City Health Officials.

Texas also has a shortage of epidemiologists, the scientists who play the role of “disease detectives” by identifying how and where infections are spreading. One reason, experts say, is because inadequate funding makes government salaries uncompetitive.

The Tyler-based Northeast Texas Public Health District provides disease surveillance for seven counties but has only two epidemiologists on staff, said George Roberts, the district’s chief executive. The state had to dispatch two more in July because “very quickly, we needed additional help,” he said.

“Part of the lesson in this whole thing is we have to have a well-trained team of public health people ready to go, because the middle of a pandemic is not the time to train people,” he said.

And state and local health departments are working with outdated technology that has hamstrung their ability to share data and work effectively, said Eduardo Sanchez, a former commissioner of the Texas Department of State Health Services. State officials relied on that data to make crucial decisions, such as when to order business closures, restrict nursing home visits or require mask-wearing.

“There’s been inadequate funding for the emergency that we’re seeing,” Sanchez said. “We would hardly be forgiving if fire stations weren’t responding to emergencies because their tires blew out on their way or they ran out of gas.”

But whether public health will receive more funding from Texas lawmakers in 2021 is an open question. Officials predict the state will face a budget shortfall of about $4.6 billion when the Legislature convenes next year. And Gov. Greg Abbott has asked most government agencies to craft plans to cut their budgets by 5% this year, though the Department of State Health Services was exempt.

“If public health is succeeding, nothing happens, and it’s hard for politicians to fund things that aren’t an immediate problem,” said Catherine Troisi, an infectious disease epidemiologist at UTHealth School of Public Health in Houston.

“The problem is if we’re doing our job, you don’t see us,” she added. “Right now we are seeing the effects of underfunding public health.”

The state’s first official confirmation that the new coronavirus was spreading in Texas came on March 11; the first recorded death came days later. With infected patients piling into hospitals in Washington and New York, and with Chinese equipment manufacturers cut off from the global market under lockdown measures, a worldwide run on supplies escalated quickly.

Hospital administrators placed masks, gowns and sanitizer into locked cabinets for fear of supplies being stolen. U.S. public health officials published guidelines about how doctors and nurses should disinfect their disposable masks for reuse as hospitals asked their staff members to wear the same masks for days on end.

A lack of protective equipment forced the medical clinic in Shackelford County, northeast of Abilene, to close its doors temporarily in March, which Abbott highlighted in a letter requesting more emergency supplies from the federal government. “This could continue to occur in areas of the state with limited medical care resources as COVID-19 spreads to those communities,” he wrote.

As local health officials from across Texas quickly exhausted their caches of protective equipment, they requested additional supplies from the Strategic National Stockpile, records show. Health departments in Tarrant County wanted 50 face guards and 100 gowns. A fire department in Smith County, which includes Tyler, asked for pipette tips, filters and other laboratory equipment needed for testing. In Houston, a hospital requested dozens of cartridges and filters for specialized air-purifying helmets.

State officials in charge of distributing Texas’ portion of the national stockpile declined those requests or put them on hold as they worked to triage hundreds of other pleas for emergency aid, records show.

“It was hard,” said Beth Powell, a Hospital Preparedness Program coordinator in East Texas. “I’m not gonna lie and tell you that it wasn’t hard when you only had so much to go around and it really wasn’t enough to cover everybody.”

Health professionals in Texas’ rural areas say the program is especially important for small hospitals that operate on the edge of profitability. Amanda Everett, a former Hospital Preparedness Program coordinator in Odessa, said the program pays for specialty equipment like air-filtering helmets that smaller hospitals typically don’t have on hand.

“A lot of that stuff is super expensive and, for our rural hospitals out here, just too expensive for us to buy ourselves,” Everett said.

The pressure on smaller hospitals and community doctors grew as governments began bidding against one another and raising prices in the private market, and distributions from national stockpiles were being prioritized to large hospital systems, said Tom Banning, chief executive of the Texas Academy of Family Physicians.

“The cupboards were bare,” he said. “Those supplies that were supposed to be in reserves weren’t there.”

So when a golfing partner who had ties to the oil and gas industry told Banning about a shipment of roughly half a million surgical masks in Mexico available for purchase, he leaped at the opportunity.

Banning and John Henderson, the chief executive of the Texas Organization of Rural and Community Hospitals, arranged for the shipment to be brought by rental truck to Austin. Banning packed boxes into his car and drove around to doctors’ offices and clinics in Austin and Houston. One administrator of a particularly far-flung rural hospital flew down in a small plane to bring the masks back to hospitals in his region.

“More than anything it just shows how broken our acquisition and distribution model was for PPE if you were having to rely on two professional associations to handle that,” Banning said.

Terry Scoggin, the chief executive of the Titus Regional Medical Center in Mount Pleasant, said his hospital came close to running out of personal protective equipment several times in May as patients filled its wings. Donations from other rural hospitals and their trade organization helped plug the gap, he said, including masks received from the Mexico shipment.

And the hospital got help from the Hospital Preparedness Program, which sent Titus Regional oxygen tanks, patient monitoring equipment and a ventilator, Scoggin said. Most important, it paid for seven clinical surge staffers, including intensive care nurses and respiratory therapists.

“Just to have them come in and do an extra shift, it calmed everybody down,” he said. “It made us at ease.”