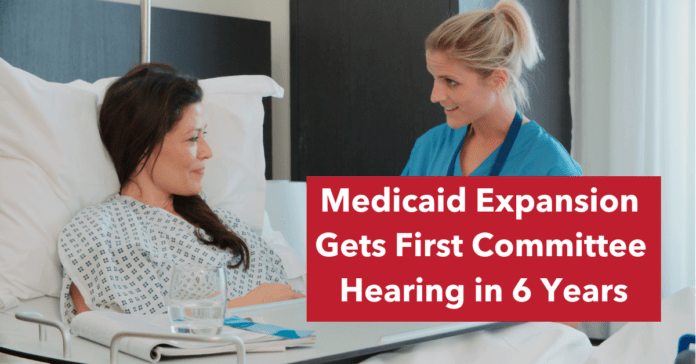 The bill in question, HB 565, authored by Rep. Garnet Coleman (D-Houston), does more than just expand Medicaid. It also codifies the essential health benefits and protections under the Affordable Care Act (ACA) into state law.

In lieu of Rep. Coleman, Chair Chris Turner (D-Grand Prairie), a member of the House committee, presented the bill by laying out the urgent problems it addresses:

“The December court decision in Texas v. Azar threatened necessary consumer protections, such as no lifetime limits, protections for those with preexisting conditions, the ability of adults to be on their guardian’s insurance until they’re 26, [and] prohibition of discrimination based on gender. House Bill 565 will codify these protections into Texas law to ensure no Texan is denied access to healthcare in the event that those federal protections cease to exist. … The legislature must act to protect uninsured Texans.”

Turner added the bill would help over one million Texans gain health coverage, as we previously reported.
The committee heard testimony from advocates representing many of the organizations who sponsored the rally on Monday in front of the capitol steps to put Medicaid expansion on the ballot.

Dr. Chasty Anderson from the Children’s Defense Fund testified the rural uninsured rate for adults is 36 percent, nearly twice the rate for all Texans. She said Medicaid expansion has a lot of support, pointing to recent polling, which showed 64 percent of Texans supporting the policy. “Texans want coverage that protects mental health, maternal health, pre-existing conditions. … [They] want to be at less risk of medical bankruptcy.”
The Cost of Repealing the ACA
Stacy Pogue, a health policy expert at the Center for Public Policy Priorities (CPPP) in Austin, testified to the parts of the bill involving market reforms and consumer protections for private health insurance as well as how it would interact with Texas’ ACA lawsuit.
Even though Texas has not expanded Medicaid, Pogue said Texas stands to lose a lot should the ACA be repealed. Over one million Texans selected a plan during the last enrollment period for the ACA’s exchanges, amounting to $4.9 billion in lost subsidies for Texans. Also, thirteen million Texans on the private health insurance market would lose lifetime and annual limits on their coverage. If the ACA is repealed, Texas youth aging out of the foster care system cannot maintain their Medicaid coverage.
On the ACA provision of children maintaining their parents’ health insurance until the age of 26, Pogue said the state law mandates children are insured until 25.
Currently, skinny short term health insurance plans in Texas discriminate against pre-existing conditions, said Pogue. Turner asked her if there were any protections in Texas law for people with pre-existing conditions should the ruling in Texas v. Azar be upheld. She said there were not, noting HB 565 would put the protection into state law, a promise Abbott made following the December ruling.
The Benefits of Medicaid Expansion
Anne Dunkelberg, another health policy expert from CPPP, testified Texas has lots of flexibility in how they want to expand Medicaid. For example, they could follow Arkansas and eight other states all of whom expanded Medicaid under Section 1115 waiver authority.
Dunkelberg also testified on the numerous economic benefits borne out by research of expansion states. A study in Ohio showed expanding coverage made it easier for newly covered adults to work and do a job search. Research in Arkansas, Michigan, Montana, and Virginia all reported savings to the states’ general funds, largely from reduced mental health and criminal justice spending. For example, Medicaid can pick up the bills of most of the hospitalizations in the state prison system. There is also a “revolving door” savings, getting chronically mentally ill patients a medical home so they do not end up in the criminal justice system.
Dunkelberg also testified Texas could gain $8-10 billion in federal funding per year at a 90 percent match rate if the state expanded Medicaid.
Rep. Tom Oliverson (R-Cypress) asked Dunkelberg if the program of HB 565 would function as a commercial product with copays and deductibles. She responded the program is anticipated to have comprehensive coverage, and it can be modeled on a commercial product with copays within certain limits and cost sharing, which can include enrollment fees and premiums.
Phasing Out 1115 Medicaid Transformation Waiver

“We are staring down the phase out of our current 1115 [Medicaid Transfromation] waiver, which as you may recall is $6.2 billion in all funds per year. About $4 billion is net federal income to Texas. … It turns out doing a coverage expansion… is one of the most powerful tools we have to help us hold on to that additional funding that helps our hospitals, as well as one of the strongest tools for trying to fold in the innovative projects in mental health and other areas that have been done around the state under DSRIP, Delivery System Reform [Incentive Payment] projects. … you can’t build [those] innovative practices and policies into your Medicaid programs if you don’t cover adults.” – Anne Dunkelberg

Medicaid expansion could also reduce Texas’ reliance on the “complex layered system” of supplemental payments for Medicaid for uncompensated care, which is outside the state budget and almost entirely borne on local hospital districts, said Dunkelberg. The supplemental payments consist of local dollars and local provider participation funds, which are used to draw down federal funds.
Turner asked Dunkelberg whether expanding Medicaid coverage would reduce the local property taxpayer burden via public hospital districts in urban counties. Dunkelberg said it should, giving the example of Harris County who reported 55 percent of the people on their Gold Card program would be eligible.
Texas’ “Achilles Heel” and the Cost to Hospitals
In addition to the advocates from the rally, representatives from the Texas Medical Association (TMA) and Texas Hospital Association (THA) provided testimony in favor of the bill.
The president of TMA, Dr. Doug Curran, said while the economy is booming, Texas’ “achilles heel” is our health care. Curran, who works at a rural hospital, said “rural hospitals are struggling” and they’re a “canary in the coal mine” for the rest of the system.
Curran shared a story of one of his patients, a small business owner. She came into his practice short of breath, swollen legs and had signs of early congestive heart failure. After three days of hospitalization, she was discharged with three prescribed medications, which should cost four dollars each; however, because she had no insurance, she could not pay for it. Curran said 4.5 million people have stories like hers. “It gets down to can they eat.”
TMA believes Texas needs to draw down all federal funds possible. Curran said the state can “figure it out in our own Texas way. We’re Texans, we can solve problems.”
John Hawkins of THA testified hospitals, under federal law, have to treat the nearly five million uninsured patients in Texas regardless of their ability to pay. This comes at a $4.5 billion cost to Texas hospitals. They have to rely on supplemental payments to make up the difference. Medicaid expansion would help rural hospitals who have a harder time doing supplemental payments. Texas has “cobbled together a safety net” because of the 1115 waiver, but because it is phasing out, something must be done.
Hawkins reminded the committee the ACA was “half funded by provider cuts” with the expectation those would be offset by expanded coverage. In a state that did not address Medicaid expansion, where “uncompensated care keeps going up”, where it is “not likely to get a favorable waiver moving forward”, and when the Medicaid Disproportionate Share Hospital (DSH) payments are ending in October of this year resulting in a $400 million cut for Texans, things look bad for hospitals and the working poor if Congress or Texas does not intervene, said Hawkins.
The bill was left pending in committee. Reform Austin will continue to report on the developments of this and other Medicaid expansion bills.