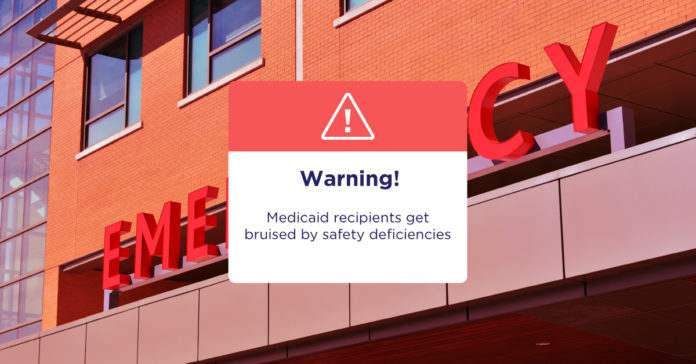 The typical hospital is envisioned as a place where sick people get better. But the 751 hospitals penalized by the federal government last year speak to a different side of the healthcare giants: Patient injuries, infections, and even deaths can cause a hospital to lose funding for Medicare payments. The federal government estimates a $566 million blow to the hospital industry due to sanctions, which are a part of the Affordable Care Act effort to establish better patient care and safety standards. Those who are hurt most by safety noncompliance are often already vulnerable populations who receive poor care or have their access to care removed by hospitals losing their deemed Medicare/Medicaid status.

Taking a closer look at the state level, 50 Texas hospitals were penalized for insufficient patient safety standards in 2018, both in rural areas and larger metropolises. And as of March 2019, 59 hospitals received the same dings from Centers of Medicare & Medicaid Services (CMS). These penalties cost hospitals one percent of payments from Medicare for the fiscal year, but that tends to add up due to high rates of additional hospital-acquired complications.

CMS conditions of participation for hospitals include quality assessment and performance improvement programs, patient rights, and nursing and laboratory services, all of which provide access to necessary treatment for patients receiving health insurance through Medicare and Medicaid. Once a hospital is found to be in violation of these CMS safety and patient compliance standards, the hospital is removed from CMS deemed status and placed under state and federal authority. Compliance monitoring is assigned to the state surveying agency’s jurisdiction while the hospital works to mitigate safety compliance deficiencies. The Texas Health and Human Services Commission (HHSC) is the agency responsible for investigating complaints and surveying Texas providers on behalf of CMS.

Leah Binder, CEO of the Leapfrog Group, which grades hospitals on safety, says that such deficiencies aren’t all that uncommon, though the level of transparency is: “It’s very unusual for hospitals to self-disclose, wherever it’s coming from. They’ve never lived in the spotlight of transparency in the past.” While the recent compliance violations came to light as a result of MD Anderson’s self-reporting, many patients who suffer at the hands of hospital noncompliance do not ever see justice. At least 23 of the Texas hospitals sanctioned in 2018 were also penalized in the previous year, suggesting that hospitals which cooperate with the CMS and state-level investigations are often placed back under CMS deemed status once they submit a plan of correction following the deficiency violations.

So why the recent surge in hospital sanctions, specifically those hospitals within the best medical center in the world? Bob Moos, a CMS spokesperson, claims that the agency is not targeting certain medical groups or organizations, and contends that CMS investigations aren’t biased: “Aside from a small percentage of sample validation surveys, our oversight of accredited hospitals is primarily based on complaint investigations. Complaints can come from a variety of sources and allege a multitude of issues.”
In the 2018 fiscal year there were 4,021,686 recipients enrolled in Medicaid throughout the state and 4,090,568 Medicare beneficiaries. Shockingly, while 32% of the Texas population is classified as low-income, only 16% of the population is covered by Medicaid/CHIP. So when a multitude of hospitals are deemed unsafe for patients who receive Medicare and Medicaid, that leaves little options for those individuals in need of urgent and intensive medical care. It is this issue that Texas hospitals must weigh when determining standards of safety protocols, and ultimately when carrying out the measures. Texas has a lot more to risk than a bad mark on a report when lives are at stake, and hospitals cannot fully guarantee the safety for each and every patient they serve.