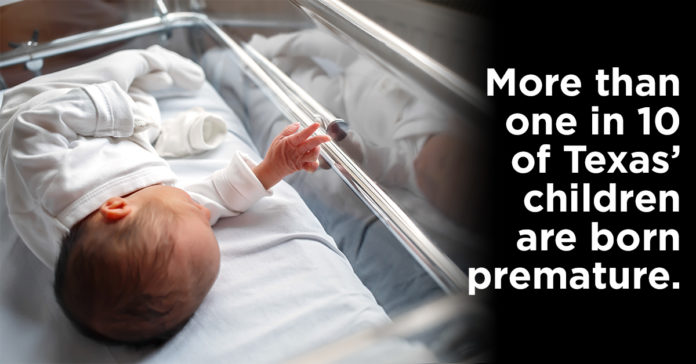 Texas premature births rise to nearly 11 out of 100.

About 11 percent of all Texas babies are born premature, according to the report. Texas’ premature birth rate is slightly higher than the national average of 10 percent.

The Lone Star State is one of 22 U.S. states where at least 10 percent of babies are born prematurely. Throughout the country, premature birth rates range from 14.2 percent in Mississippi to 7.8 percent in Oregon.

Premature births are heavily influenced by mothers’ race and income, according to the report. In Texas, about 14 percent of black women give birth prematurely, compared to 9.5 percent of white women.

The racial breakdown of Texas’ premature birth rates is very similar to the breakdown of the national average. Across the U.S. 9 percent of white women and 13.6 percent of black women give birth prematurely.

In percentage terms, the disparity between white and black preterm birth rates may not seem like much. However, the differences across populations can be massive.

“In Texas, the preterm birth rate among black women is 38 percent higher than the rate among all other women,” the report states. The report’s authors also found that about 11 percent of Texas’ Native American and 10 percent of Hispanic babies are born prematurely.

Nationally, 9.4 percent of Hispanic women and 11.3 percent of Native Americans give birth prematurely.

Texas premature birth rate one of the highest in nation

Children born prematurely are in danger of developing long-term health complications — including anemia, lung infections, and jaundice. The March of Dimes looked into various factors that contributed towards premature births, such as income, quality of prenatal care, and insurance.

Obesity can also contribute to premature birth. Obese women have a 30 percent increased risk for early delivery. After considering the outside factors, the March of Dimes found that premature birth rates in Texas remain elevated.

One factor that contributes to premature births is a lack of health insurance. The rate of preterm births among uninsured women is at 19.8 percent, according to the Washington Post.

Another study found that more preterm births were paid for by Medicaid than private insurance,12.7 percent versus 10.9 percent. Texas’ high rate of premature births could be a side-effect of the state’s high rate of uninsured women.

Oklahoma also had 11.4 percent of its babies born preterm. The one-to-one relationship between a lack of health insurance and premature birth rates isn’t completely clear.

Only 2.9 percent of the women in Washington, D.C. don’t have health insurance. However, the District has a premature birth rate of 10.1 percent.

The lack of health insurance contributes to Texas overall low health ranking. The state ranks 43 out of 50, according to America’s Health Rankings.

These rankings follow a session where the Texas Legislature did very little for women’s health. Of the 40 women’s health bills proposed, only nine passed.

This left a majority of legislation on the floor or without a committee hearing. In the past, Texas has taken steps to curb its premature birth rate.

In 2011, Texas passed a law to reduce elective early deliveries. Lawmakers voted to refuse to pay providers who induced or performed medically unnecessary labor or a cesarean section. This new law reduced the rate of unnecessary “early delivery by as much as 14 percent,” according to Kaiser Health News.

Despite the health concerns, the idea of elective early-term births has its proponents. Some mothers like the convenience of being able to schedule their delivery date.

However, what’s convenient for the mother may not always be what’s best for the baby. Texas premature births can be both a blessing and a curse.