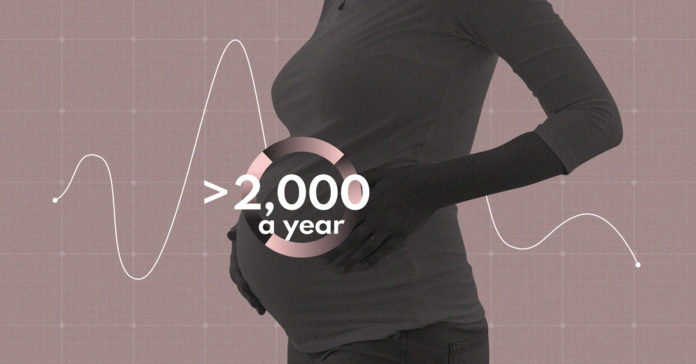 A baby dies every 16 seconds, according to a new report on stillbirths released by the World Health Organization, United Nations Children’s Fund and other global organizations this month.

A stillbirth is the loss of a baby at or after 20 weeks of pregnancy.

In the United States, there are approximately 24,000 stillbirths every year.

Texas loses over 2,000 babies a year due to stillbirths.

“That is approximately the same number of babies that die every year during the first year of life, and more than 10 times the number of deaths due to SIDS (sudden infant death syndrome),” explained Dr. Kjersti Aagaard, professor of obstetrics and gynecology at Baylor College of Medicine, in an email.

There are racial disparities in the numbers. Black mothers are more than twice as likely to experience stillbirth, compared with Hispanic and white mothers, according to a study from the CDC.

However, some health complications are known to increase the risk of late fetal stillbirth, such as hypertension, diabetes, some forms of kidney disease, obesity, smoking, having had a prior stillbirth and advanced maternal age.

Some stillbirths do have causes, and these may include major congenital anomalies (or “birth defects”), known genetic syndromes or large structural changes to the DNA, and some problems with the placenta, according to Dr. Aagaard.

Also stillbirths can occur from trauma, such as a car accident, which shears the placenta or leads to direct harm to the baby. This highlights the importance of wearing a seatbelt.

Also, women who suffer from domestic violence are often prone to these same type of injuries.

Dr. Aagaard, explained that the vast majority (as high as 80% in some studies) of stillbirths are unknown or “unexplained stillbirths,” this means there isn’t an identifiable cause. “That is why we typically recommend a very thorough evaluation of the stillborn baby at birth. This may include an autopsy alongside genetic and other lab testing,” she said.

You should receive information about stillbirths and the risks during your pregnancy.

“We and our midwife colleagues try to have these conversations throughout the pregnancy,” said Dr. Aagaard. “We try to strike a balance between not causing undue stress, but also not sugar-coating risk.”

The March of Dimes, a national nonprofit organization that works to improve the health of mothers and babies, has some tips for measuring kick counts.

“Every day, time how long it takes for your baby to move 10 times. If it takes longer than two hours, tell your provider. Also, see how many movements you feel in one hour. Do this three times each week. If the number changes, tell your provider,” the website explains.

Your doctor should be checking for any complications during your pregnancy or health issues that could cause problems.

She suggests that if you are worried about the risk of stillbirth to talk with your physician or midwife to tailor a plan that is unique to your risks.

If you have experienced loss or know someone who has, these stories and these stories about how families have navigated through loss from a stillbirth may bring comfort.

Bo’s Place in Houston has grief support groups for families who have experienced pregnancy loss.

Here are some resources in Dallas for stillbirth and infant loss.

Here are resources in San Antonio and resources and support groups in Austin.