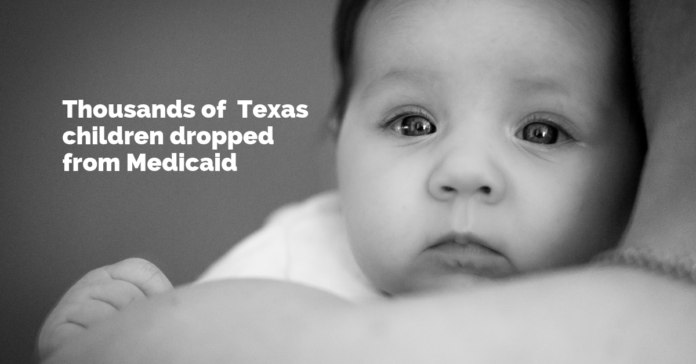 According to a report by Georgetown University’s Center for Children and Families, an estimated 835,000 Texas children went without health insurance in 2017, an increase of about 80,000, or more than 10 percent, from 2016. This means Texas has the highest rate of uninsured kids in the country.
Thousands of low-income children are dropped from Medicaid per year because random spot checks suggest families are no longer meeting eligibility requirements. In most cases, this is due to the family failing to respond to letters requesting documentation in a timely manner. In many instances, the letters went to the wrong address or arrived after the deadline to respond.  Families are given 10 days to respond to the state’s request for information.
Periodic income checks for children on Medicaid are not required by law, but began being enforced in 2014 by the Health and Human Services Commission. The income checks cut down on fraud and people with a higher income who were taking advantage of the services. This directly affects low-income families who experience a temporary surge pay increase due to seasonal jobs.
For those children who have to reapply for eligibility due to this temporary pay increase, this means a gap in coverage, and children running the risk of missing critical doctor’s appointments. Parents are forced to seek costly alternatives and exposes them to potentially accruing debt over expensive medical bills.
In an effort to improve the state of Medicaid in Texas, Rep. Philip Cortez, D-San Antonio has filed House Bill 342 which would end arbitrary spot checks and change the policy to offer children on Medicaid one year of continuous coverage.  Other guidelines would review eligibility during the annual enrollment process to make it more streamlined and less stressful for families. The problem is not too many children are on Medicaid, it is that not enough are not getting it.
Studies have shown that having access to quality healthcare can lead to improved reading scores, decreased high school dropout rates and likelihood of completing college.